How Darren Missed Out On Wigan Captaincy 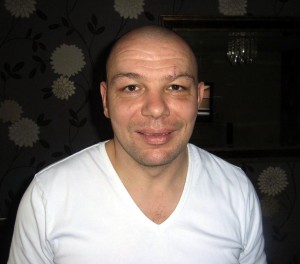 Darren Simkin has revealed to Wolves Heroes how he was offered the captaincy at a Premier League club during his early-1990s time at Molineux.

Okay, we’re stretching a point. His pursuers weren’t in the top flight then but they are now.

“Wigan came in for me and offered me a quality deal,” he told us. “But I stalled them because I got home and had a phone call from John Rudge at Port Vale, who said he was going to put an offer in the next morning.

“Graham Taylor was manager at Wolves and asked me why I wanted time to consider joining Wigan.

“I was actually just about to go there in the end when their manager, Kenny Swain, was sacked. He had offered me the club captaincy as well.

“I think people were surprised I didn’t jump at the move because Kenny had put a very good contract to me.”

Wigan were in the bottom division at the time but were in the Premiership within a decade and are now in their sixth successive season at that level.

Simkin, who played only 16 first-team games for Wolves after being signed by Graham Turner from Blakenall in 1992, subsequently joined Shrewsbury, from where he was farmed out on loan to Wayne Clarke’s Telford.

A permanent move to the Bucks Head followed and he again found Kevin Ashley a team-mate.

He then rejoined Blakenall, only to climb the ladder again by joining Stafford Rangers and linking up from there with Barry Powell at Hednesford.

Dressing-room associations with former Wolves personnel haven’t been his only contact with people from the club where he briefly looked a good prospect as a sturdy defender.

He has remained loyal to Molineux mates since he quit playing in 2004 to join the fire service. 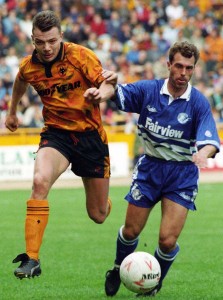 Simkin in hot pursuit against Millwall in 1993 on the day Molineux's massive South Bank was used as a terrace for the last time.

“I bumped into Chris Marsden, Tony Dinning and Jinky Smith at the start of last season and went to an evening with Geoff Thomas, Bully and Don Goodman two or three years ago,” he added.

“I also went to Paul Birch’s 40th birthday with Steve Piearce and was as thick as thieves with Birchy.

“His illness was a horrible thing but he would have had a laugh at the mistake I made with his funeral. I got my weeks mixed up and went on the wrong day! I couldn’t understand why the turn-out was so small but it was absolutely huge when I went back on the right day.”