How Scouse Emerged In London Excursions 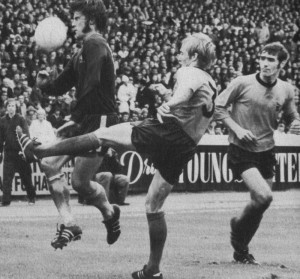 John McAlle, on one of his early trips to Stamford Bridge, watches his good friend Derek Parkin challenge Iain Hutchinson.

Wolves’ trips to face Fulham and Tottenham over the next two weekends mean the likes of Steven Fletcher and Jelle Van Damme will have a London flavour to the first few weeks of their debut Premier League season at the club.

But few players in Molineux history can have become so used to the capital so quickly as John McAlle.

His senior debut was as a substitute in a defeat at Chelsea late in 1967-68 and, after making his first start in the side in a 3-0 victory against the same opponents only five days later, his opening two appearances in the starting 11 in 1968-69 came away to Tottenham and West Ham and his fifth was at Arsenal.

The trend continued in 1969-70, when he made only five full appearances in the shadow of the David Woodfield-John Holsgrove partnership. But two of those were at Chelsea and Arsenal.

“Obviously I can remember playing in London many times but was never aware of doing so that often in my early games for Wolves,” McAlle said.

“I recall being replaced by Alun Evans with about 20 minutes to go on my debut because Chelsea were beating us 1-0.

“Then I went on for Mike Kenning for the last few minutes of the return, when Frank Wignall scored a hat-trick.

“Another memory is marking Jimmy Greaves at Spurs – or trying to! He escaped me twice and scored twice. He was like a little ghost.

“At the end of that season, I asked Bill McGarry for a new contract and a pay rise and he told me I’d almost got him the sack. He said he’d brought me in for the game against Spurs and we’d lost.

“Then he said: ‘Don’t worry, I’ll sort you out.’ That was obviously the soft side of his nature.”

A contributor to the Wolves programme in 1970-71 calculated that McAlle, who was 60 at the start of this year on the same day that Bert Williams turned 90, made eight of his first 29 Wolves appearances in London. 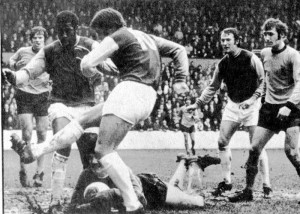 Happily, his subsequent trips to the big city were to include one for the 1974 League Cup final, in which he was one of many heroes in the 2-1 victory over Manchester City.

But, for luxury at games, he recalls Highbury with particular fondness.

“We always hoped to go there in mid-winter,” he added. “They had under-floor heating in the dressing rooms, so that was a good place to go when it was cold.”