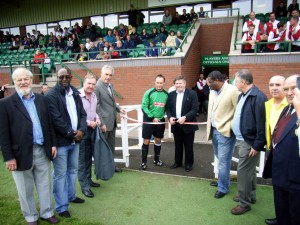 Ted Farmer recalled scoring a hat-trick there on his first appearance for Wolves and Bob Hazell remembered fearing the worst in a conversation with Bill McGarry.

But there’s something fitting about letting John Black sum up the mood of the former players who descended on Castlecroft yesterday, in many cases for the first time in decades.

Black had driven from the north of Scotland just to be present, his loyalty to the gold and black cause stretching well beyond the call of duty as he made sure he reacquainted himself with pals and a workplace he hadn’t seen since the day he left the club in 1980.

“This is where I came to work four of five times a week for almost six years,” said the 1970s winger. “I can’t believe so many of us are back here together 30-odd years on. It’s very nostalgic.”

Black, now 52, booked himself into the Connaught Hotel either side of joining up with around 20 other former Wolves players to celebrate the official reopening as a football facility of the club’s traditional training HQ.

Duncombe was a member of the Wolves side who reached the final of the 1975-76 FA Youth Cup while Prentice is a present-day Academy coach at the club. 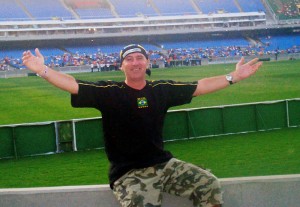 Not a patch on Castlecroft.....John Black in the Maracana Stadium on a trip to Brazil!

Others had to cry off and so missed the inevitable outpouring of reminiscences about a venue that had been under rugby union control for more than 20 years.

“I played my first Wolves game here and also my last,” Farmer said. “The first was against Arcadians, when I scored three, and the last was against Walsall Reserves in 1966 before my injury finished me.”

Stories circulated of how Cocker also made a mark in a big way by scoring seven goals in one match at a ground that was then still in its infancy.

Castlecroft was opened by FA chairman Sir Stanley Rous 54 years ago this month and the pitch remains how most remembered it, although a smart new stand, with dressing rooms and social rooms, sits in place of the rickety structure the former players knew.

And Hazell recalled seeing the place a little run-down after being brought back on loan from Leicester in 1985-86 for his second Wolves spell.

“The pitch had no grass on it and contributed to me sustaining an Achiles injury almost as soon as I got back here,” the big central defender told Wolves Heroes. “I informed Bill McGarry on the day I was due to play that it was giving me problems.

“I went out and played against Bristol Rovers but of course it went, I was substituted and I never played for Wolves again.”

Castlecroft is now home to West Midlands League premier division club AFC Wulfrunians, who have Purdie as a youth coach. 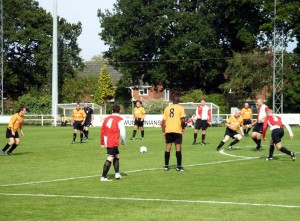 Mel Eves lays a pass off to Dale Rudge (left) in Wolves All Stars' game against AFC Wulfrunians.

Their younger legs held sway yesterday as they ran out 4-2 winners over a Wolves All Stars side despite goals by Simkin and guest player John Williams, formerly of Coventry and Swansea.

The fixture doubled as a benefit game for Geoff Palmer’s son Steve, who first played for the host club at 17, and also raised money for Compton Hospice.

The attendance was more than three times bigger than Wulfrunians’ league ‘norm.’