A Quite Astonishing Career 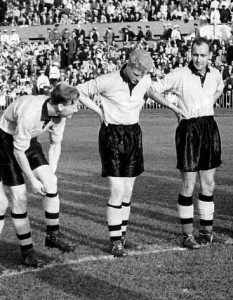 Dennis Wilshaw (right) lines up with another Wolves part-timer, Bill Slater (left) and Ron Flowers in Russia in 1955.

I’ll never forget where I was on the day the Americans call 9/11.

I was disappearing down the long drive of Dennis Wilshaw’s lovely home in Newcastle-under-Lyme when the news dawned, via the Simon Mayo Show on BBC Radio 5 Live, that New York’s twin towers were no more.

For four hours, I had sat entranced in the company of one of Wolves’ best ever inside-forwards, unaware that the face of the world was changing at the same time.

Talk about losing yourself in nostalgia and memories, then being awoken to depressing 21st century reality.

It was an opportune interview in as much as Wilshaw died at 78, following a heart attack, in the early summer of 2004.

We had met again in the meantime on his visits to reunions at Molineux but I remained grateful for that extended private audience with a man whose career at the club was unusual to say the least.

His record of 117 goals in 232 League and Cup goals would appear remarkable enough whatever the criteria. But it was positively extraordinary given that he was never more than a part-time player.

“Stan Cullis and I had many fall-outs over it, including one where I found myself in front of the board,” Wilshaw told me.

“It never sat easy with him that I always wanted to continue my teaching career in the Potteries and he only really saw me for matches.

“He would have wanted me there for training every day as well really but I stayed fit the best I could up here and then he either chose me or didn’t choose me in his side.”

There are some topical links with Wilshaw’s career beyond the fact that it’s nine years on Saturday since we spoke at such length. 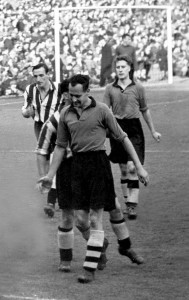 Wilshaw, followed by Roy Swinbourne, leaves the field after a Molineux clash with Newcastle.

England’s second successive European Championship qualifying victory came last night in a country against whom he scored when the 1954 World Cup finals were staged there.

And the name Newcastle United – Wolves’ most recent Premier League opponents – featured strongly at the start and finish of his career.

A sensational Football League debut was marked by his hat-trick at home to the Magpies in March, 1949, and it was against the same club that he played his final match as a professional.

“I was at Stoke then and it was ironic really because we were involved in a drawn-out FA Cup fourth-round tie against Aldershot in 1961 which had its second replay at Molineux,” he added.

“We eventually scored three, of which I got two, and went through to play at St James’ Park, where I broke my leg. Sadly, that proved to be it for me. I never got my fitness back.”

Wilshaw, then 34, had never found goals to be an automatic passport to selection, with club or country.

His debut-day treble was not enough to prevent Jimmy Mullen taking the no 11 shirt from him in the next game and a subsequent individual scoring rush of seven goals in six appearances proved insufficient to catapult him into Wolves’ victorious FA Cup winning side at Wembley shortly afterwards.

It was a similar situation with England. Despite netting twice on his debut away to Wales, he was left out for the next game and even his four goals against Scotland in 1955 bought him only so much time in the side. 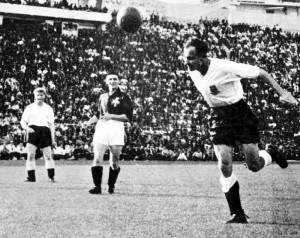 In all, he scored ten times in only 12 caps, also playing for the national B team before calling time in 1957 on a Molineux stay that had seen him finish top scorer in the 1953-54 title-winning campaign and, as tends to be recorded a little less obviously in the history books, breach the defences of Spartak and Real Madrid.

It has become a cliche but football’s increasing professionalism surely means we will never see Dennis Wilshaw’s like again.