Regis – Man Of Many Wolves Links! 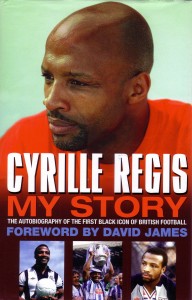 Cyrille Regis has revealed two fascinating Wolves connections over and above his season’s service to the club in 1993-94.

The former England striker used his welcome speech at yesterday’s launch of his autobiography ‘My Story’ to disclose that none other than Alex Ferguson enquired about him while he was on the staff at Molineux.

And he explains in the 258-page hard-back how Coventry lined up a cut-price move to Wolves for him well before he became an FA Cup winner at Highfield Road in 1987.

Taken to the Sky Blues by Bobby Gould from Albion for £250,000, he felt out of favour after Don Mackay had been appointed as manager and writes: “Wolves were tumbling through the leagues and were in Division Three.

It may have been at The Hawthorns that Regis made his name but his career nevertheless has several Molineux links.

He was discovered as a teenager at non-League Hayes by former Wolves and Baggies manager Ronnie Allen, who was so convinced he had what it took to score goals at the top level that he offered to pay the transfer fee himself.

Then, in 1997, he delivered his nephew Jason Roberts to Molineux from a similar non-League background, only for Mark McGhee to sell the youngster without giving him a single first-team game and then see him score goals elsewhere, including Albion, in abundance.

Regis admits he made a low-key contribution on the pitch with Wolves after being signed on a free when released by Aston Villa.

“I received several offers,” he adds. “John Rudge wanted me at Port Vale, and Luton Town, where David Pleat was manager, also came in for me.

“I even explored the possibility of playing in Cyprus. Instead, I broke the hearts of thousands of West Brom fans by joining Wolves.

“I didn’t get too many starts but was on the subs’ bench a lot. I was also involved in the FA Cup run when we reached the quarter-finals, only to lose 1-0 at Chelsea.

“BBC 1’s Football Focus programme ran quite a long feature about me ahead of that game but I had fallen down the pecking order at Molineux by then and couldn’t claim the Cup run was inspired by anything I had done.

“I hardly played for Wolves and only scored two goals all season, against Birmingham and Peterborough.”

One journalist with Wulfrunian leanings congratulated Regis during yesterday’s formalities for seeing the light and moving to Molineux after his stints with Albion, Coventry and Villa!

Albion Supporters Club chairman John Homer took a different tack and reflected on the player’s appearance as a substitute for Wolves at The Hawthorns in September, 1993.

“No player has come on in gold and black here and received a standing ovation like that,” he pointed out.

Regis may or may not know it but he was probably auditioned for a role in Graham Taylor’s Wolves backroom team in the spring of 1994.

Heads turned when the player turned up with the manager in the directors’ box for a reserve team fixture at Leeds, more than one senior figure interpreting the duo’s journey north together as Taylor’s way of checking what Regis might have to offer his staff. 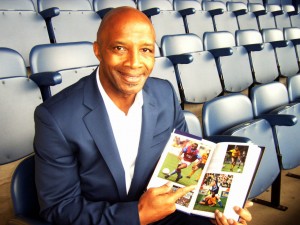 Nothing materialised and maybe Regis, who has since worked as an agent and been awarded an MBE, discovered why when he served Albion in the late 1990s as reserve coach.

“I worked with John Trewick, who was a better coach than me (and later joined Wolves) but I didn’t love it enough,” he said.

* ‘My Story’ is published by Andre Deutsch, co-written with Chris Green and available at £18.99.