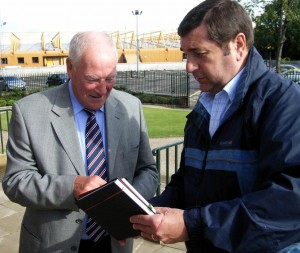 Wolves’ visit to Tottenham on Saturday is due to be marked by a mini reunion of England World Cup colleagues.

A golf weekend staged by the country’s 1966 heroes this summer led to an invitation from Martin Peters for Ron Flowers to be his guest at Wolves’ next visit to White Hart Lane.

And the Molineux legend is set to take up the offer this weekend at a fixture decided by Kevin Doyle’s early goal last December.

“I would imagine Martin and I will have different loyalties, with him rooting for Spurs, who are one of his former clubs, and me getting behind Wolves,” Flowers said.

“But it should be a lovely day and it will be great to see him again.

“I’m due to pick up Peter Bonetti on the way down as well. He lives in the Midlands and was the goalkeeper coach at Molineux for a while, so that’s two of us with Wolves connections!”

Peters scored one of the goals in England’s unforgettable 4-2 final victory over West Germany 44 years ago while Flowers and Bonetti were unused members of Alf Ramsey’s squad.

We have reported previously on how the Boys of 66 meet each year, with their wives, for a golf and social weekend.

And Flowers, still a keen player and a former captain at his club, is on stand-by to act as host in the next year or two. 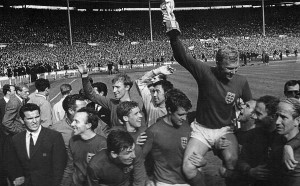 But football will be on his mind this weekend at a venue at which he regularly played in his hey-day – twice in front of crowds of more than 62,000.

Only 25,974 were present for his last competitive visit to White Hart Lane, though – an astonishing 7-4 Wolves defeat in March, 1965.

Flowers and his wife Yvonne were on duty last Saturday at the official opening of a Wolves exhibition at the Molineux Hotel.