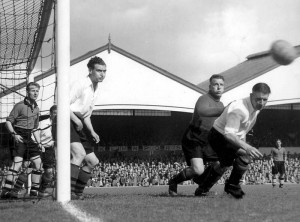 Goalscorers Jimmy Dunn (left) and Johny Hancocks on the warpath in Wolves' 7-1 demolition of Bolton in 1950.

There is something about this time of year that Wolves clearly liked in seasons gone by.

A look through the record books reveals that September is the month in which they handed out some of the biggest thrashings in their history.

Not surprisingly, many of the victories came in Wolves’ glory years – the period from 1949 to 1960 inclusive, in which they won the League Championship three times and the FA Cup twice.

Stan Cullis’s side went one better when hammering Chelsea 8-1 on September 26, 1953, and improved yet further when beating Cardiff 9-1 at Ninian Park on September 3, 1955, to produce what still stands as the top flight’s equal biggest away win.

September, 1959, produced an even greater bonanza, with a 6-4 win at Manchester City on the fifth followed by the famous 9-0 trouncing of Fulham on the 16th.

The club’s two-year stay in the Second Division in the mid-1960s produced more early-autumn goal feasts.

They scored 21 goals in six League games in September, 1965, but still lost two of them spectacularly – 4-3 at Rotherham and 9-3 at Southampton. 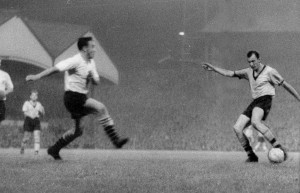 Eddie Clamp crashes in one of Wolves' nine against Fulham 51 years ago this week.

Twelve months later, 7-1 was back on the Molineux agenda as Cardiff were sent packing from Molineux, with Terry Wharton hitting a hat-trick.

One more September victory from yesteryear is worthy of a mention, more so for its scoring pattern than its volume of goals.

Anyone who departed five minutes early to beat the rush on the 22nd of the month in 1951, with Wolves leading Chelsea 4-0, would have been a bit miffed. The final outcome was 5-3 in the home team’s favour.