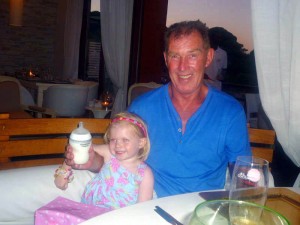 When Billy Rafferty checks the results to see how his former clubs have got on, it’s no easy task.

There are eight in all to follow and the fact that they stretch from Carlisle to Bournemouth and Newcastle to Plymouth underline how well travelled he was in his playing days.

Actually, he spread his wings much further than that from his Glaswegian roots because he finished with three years in Portuguese football with Farense but we’ll forgive him if his eyes are fixed mainly on the big 92!

“Thankfully, the majority of my ex teams are doing well at the moment,” he said.

“It’s great to see Newcastle, Wolves and Blackpool up in the Premier League, and Carlisle, Coventry and Bournemouth are doing well in their divisions.

“Portsmouth are the only ones who are having a really difficult time at the moment.”

Just as Billy became well used to motorways in a career of more than 500 senior matches, he remains keen to stay in touch now with friends from the game.

He regularly links up with John Richards and Willie Carr and their wives, is due to attend a Coventry reunion next month and has already been down to Plymouth this season for old time’s sake.

“I still live near Carlisle, so I go to most of their home games, but also went down to see them draw at Plymouth the other week,” he added.

“The people there had been keen to see Paul Mariner and myself reunited as we were a big goal-scoring act together in the mid-1970s.

“We met up about seven years ago but it was a bit hectic because we hadn’t been there together for about 30 years and there were a lot of autographs to sign. It meant I hardly spoke to Paul. So, with him back now from America and working as assistant to Peter Reid,  it was lovely to see him properly this time for two or three days.

“Funnily enough, I sat with the Carlisle directors as our son-in-law is the son of the Carlisle chairman Andrew Jenkins.” 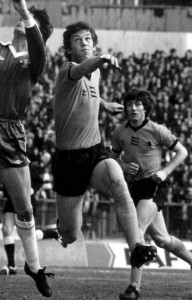 Supported by John Richards when in action for Wolves at Chelsea in the late 1970s.

Rafferty actually outshone Mariner when a visit to Ipswich on the last-day of 1977-78 saw him emerge as Wolves’ match-winner as he scored two of the eight goals he managed in exactly 50 appearances for the club.

Three months before his 60th birthday, he still organises corporate football leagues in the border country as well as renting out the premises that he, his wife and his daughter used for a decade and a half to run a health, fitness and beauty business.

Alas, all those matches have taken a toll and he is due to go into hospital in the next few weeks for a knee replacement.