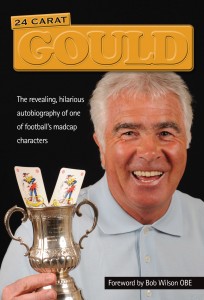 A front cover designed with Wolves fans in mind.....

Bobby Gould is finding himself at the centre of a welcome stampede for his time as he prepares for the launch of his autobiography in a fortnight.

The former Wolves striker will be back in the city on Friday thrashing out further details of the promotional campaign surrounding the publication of 24 Carat Gould.

But he is already booked in for a host of personal appearances before and after the book goes on sale, with Bristol, Coventry, London and even Cornwall figuring alongside the West Midlands on his schedule.

“My attitude to this project is that I will only release one autobiography, so I want to make a proper job of it,” he said.

“The book is being printed in Cornwall and I’m jumping in the car next week to drive down there to see it bound and come off the presses.

“It seems that my visit has caused a bit of a stir because one or two radio and newspaper people are descending as well for interviews and photographs.”

The sight of flashlights and microphones is something Gould is going to get used to quickly.

He was on air at the BBC’s local radio station in Coventry for an hour and a half last Friday and has lengthy commitments looming with talkSPORT (the station he works for), Sky Sports, Radio London, Radio Bristol, Radio Shropshire, Radio Gloucestershire and others.

The book is being launched with a dinner in Coventry on publication day, Thursday, October 7, when he is also due to be interviewed live by the BBC for the Good Morning Wales programme.

Wolves’ media outlets are stocking 24 Carat Gould, which will retail at £15.99. Interested parties can email Wolves Heroes’ sister company on info@thomaspublications.co.uk or ring 07734-440095 for further details, especially on how to obtain signed copies. Enquiries regarding the October 7 launch dinner should be directed to the same address or number.

Gould scored 39 goals in his 93 games for Wolves in the 1970s and says: “I am still very fond of the club after all these years and don’t need much of an excuse to go back to Wolverhampton. 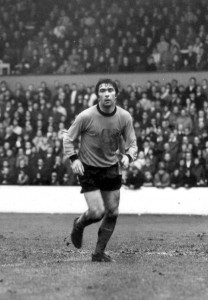 Leading the attack can be a lonely job.....

“We’ve had a few of our meetings in the city, including one at Molineux, and there hasn’t been a dull moment.

“The book contains plenty of laughs as well as some revelations and one thing I can promise is that it won’t be boring.

“If  football supporters find it half as much fun to read as I have had writing it, I will be very flattered.”

Gould won the FA Cup as a player with West Ham and as a manager with Wimbledon before having a four-year stint in charge of Wales.