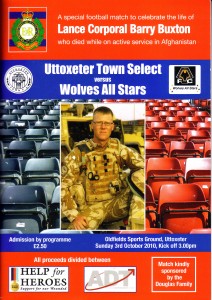 The programme for next Sunday.

Wolves All Stars make the trip into East Staffordshire next Sunday to fulfill a fixture in honour of someone they would view as a true hero.

Mel Eves’ side will be at the Oldfields Sports Ground in Uttoxeter to face a Uttoxeter Town select XI (kick-off 3pm).

The October 3 game has been arranged to celebrate the life of Lance Corporal Barry Buxton, who died while on active service in Afghanistan this spring.

And it is being organised by Mick Harper, a lifelong Wolves follower who has sold programmes and other souvenirs from his car park ‘pitch’ opposite Molineux for many years.

“I didn’t know Barry but I know members of his family and was delighted to help get the Wolves All Stars to Uttoxeter for a game in his memory,” he said.

“It is obvious a lot of people thought so much of him. There has been a lovely response from so many different quarters and we hope for a big turn-out on the day.”

Mick, who is well connected in the Uttoxeter area despite having lived for many years in Ashbourne, wasted no time producing an excellent 56-page programme for the game.

And he was at the All Stars’ last match – at Castlecroft earlier this month – to hand copies out to boost awarness of a fixture from which all proceeds will be divided between Help For Heroes and ADT (The Army Dependents Trust). 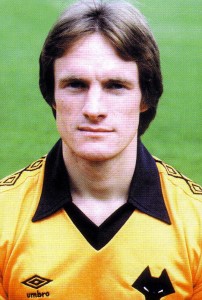 The game will be followed by an auction of a host of items, including a signed Wolves shirt, a signed framed photo of Gordon Banks holding the World Cup in 1966 and a framed copy of a 1966 World Cup poster bearing Geoff Hurst’s signature.

The nomadic Wolves side have helped raise more than £20,000 through their appearances over the last year.

Eves, meanwhile, is seeking an assistant manager, primarily to help organise the team and liaise with opponents and officials on match days.