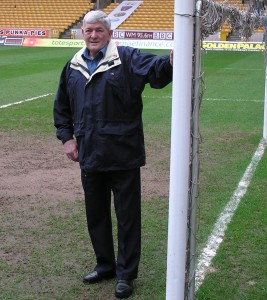 John Cullen on a trip back to Molineux.

John, the club’s keeper in the glorious FA Youth Cup triumph of 1957-58, passed away earlier this month at the age of 70 at his home just off the Tettenhall Road in Wolverhampton.

He played home and away against Chelsea in that historic final 53 seasons ago and elsewhere during a run in which Bill Shorthouse’s lads had earlier accounted for Albion, Aston Villa, Stoke, Leicester, Bolton and Manchester United.

Although he never reached the senior side at Molineux, he went on to have a first-team career at Oxford as a team-mate of Graham and Ron Atkinson and played non-League football for the likes of Stafford Rangers, Kidderminster and Hednesford.

And it was with the latter that he branched out into management alongside Gerry Mannion after being taken to the Cross Keys by a third member of the cup-winning Wolves youth side, Granville Palin.

“Gerry, who was killed in a car crash a few years ago, was my Godfather and he and my Dad were very close from their Wolves days,” Sean Cullen told us.

“Dad appreciated that because he had apparently been very homesick when he came over to Wolves as a teenager from a club in Dublin called Ormeau Athletic.

“The first person he asked for directions to his digs was less than complimentary to him and it probably wouldn’t have taken much to have him rushing back to Ireland, although Burnley were also very keen on him.

“But he grew to like Wolverhampton a lot and met my mother, who passed away around 18 months ago, near the ground. She was a season ticket holder before they met.

“Dad played in the Wolverhampton Works Premier League for a long while and bought into a garage business not far behind what we used to call the ‘new’ stand. He often serviced vehicles belonging to people at the club and spent a lot of time in Joe Gardiner’s office because he also did some scouting. 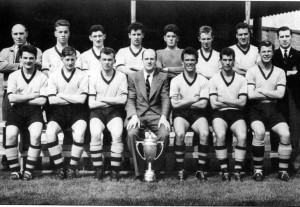 John Cullen in his keeper's jersey with the young Wolves heroes of 1958.

“He would never say a bad word against the club because they were very supportive when he was in hospital with a muscle wasting problem during his playing days and losing a lot of weight.

“Later on, he played many games with the likes of Roy Pritchard and Jimmy Mullen in the Wolves All Stars team and appeared in some testimonials, including the one for Ted Farmer, who scored four of the goals in the Youth Cup final against Chelsea.”

John, who spent the last 20 years of his working life at Banks’s, not far from his home, also leaves a daughter Siobhan.