Rodger And Out – After One Game

Molineux Opportunity Was A Fleeting One 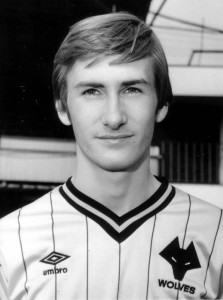 Graham Rodger at Wolves in the early 1980s.

Graham Rodger played in as many FA Cup finals as he did Wolves first-team games; just the one.

And the contrast between the two matches could hardly have been greater, a 3-0 Molineux defeat against Ipswich being banked as a less cherished memory than the day he helped make the winning goal for his home-city club, Coventry, at Wembley three years later.

Rodger, a giant of a centre-half, actually chose Wolves over his beloved Sky Blues as a 14-year-old in 1981, his mind partly made up by a certain friendship.

“There was interest from Coventry when I was a kid and that seemed the natural place to sign because I was a season ticket holder and used to watch from the Spion Kop,” he said.

“But Wolves’ youth set-up was so well regarded at the time that I thought it was beneficial for me to go there instead.

“It helped that Tim Flowers, who came from a couple of miles away in Kenilworth, was there and was a pal of mine from school and Sunday football.

“We were both scouted by a guy in Warwickshire called John Hannah because we played in a sort of Wolves feeder team down there.

“Frank Upton was my coach at Wolves and he was brilliant in instilling good values, although he was a hard task-master and I was always thinking: ‘Jesus, get off my back.’ I realised later what a good grounding it had been.

“John Pender was injured late in our 1983-84 First Division relegation season and I was called up to replace him against Ipswich. I thought I was ready but I wasn’t.

“I found the step up from the reserves too big and wasn’t given another chance in the team. They were tough times for the club but, on £25 a week with a bus pass and my digs thrown in, I could hardly be accused of bankrupting them!”

Rodger’s stay at Molineux might have been much longer. He was offered a three-year contrast extension, only to hesitate and subsequently be told the window for acceptance had elapsed.

Sure enough, he was on the move in 1985 and there was a certain inevitability in Highfield Road being his destination. Wolves and Coventry had been jousting for the Second Division title round the time of his birth on April Fool’s Day in 1967 and now Upton’s move to the Sky Blues made him feel at home when he followed suit.

Rodger would play 44 first-team games for Coventry, of which the one against Tottenham in the 1987 FA Cup final obviously stands out for the commanding 6ft 3in centre-half.

Preferred on the bench to Steve Sedgley, he was introduced two minutes from the end of normal time because of an injury to skipper Brian Kilcline.

The rest is Boys’ Own stuff. In extra-time, he intercepted a pass – from Glenn Hoddle, no less – fed Lloyd McGrath and saw the midfielder’s right-wing cross deflect in off Gary Mabbutt’s knee for the deciding goal.

Rodger was only a few weeks out of his teens and was a Cup winner for a club who had never before lifted a major trophy and haven’t done so since.

His career could barely sustain such heights but he followed up his stint at the Sky Blues with a spell at Luton, where he was eventually shown the door by Spurs’ beaten Cup Final manager David Pleat!

And he then embarked on his long and on-going service to Grimsby Town – initially as a player over some 170 games, then as a coach, caretaker manager, fully-fledged boss and now as a sports in the community role.

More than once, he has been back to Molineux as a visiting player and retains happy memories of his first club.

“I recall spending half-term holidays at Castlecroft and training in a room upstairs in that huge Social Club next to the ground,” he added. 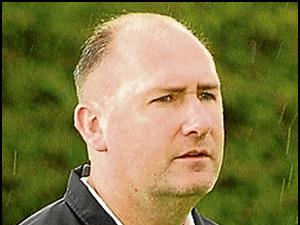 And the Grimsby Town version in much more recent times.....

“The pitch at Molineux was always like a carpet and I loved the place and the people. There was so much tradition, which I found very exciting.”

Rodger also won four England under-21 caps but, having had the likes of Tony Adams and Martin Keown as competition at the time, wonders what might have happened on the international front had he been summoned elsewhere.

He was born in Glasgow before moving to Warwickshire when a few months old and naturally reflects on whether he might have gained senior recognition had he stayed available for Scotland.