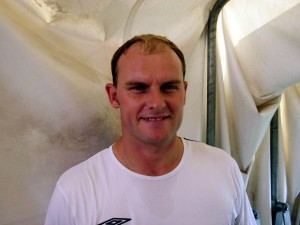 Michael Oakes....getting a sweat on with Wrexham.

To some, the thought of living in one country and travelling to another to work might be an exciting one.

For Michael Oakes, the reality is something less than exotic as such a schedule merely takes him from leafy Cheshire into North Wales two or three times a week.

The former last line of defence at Molineux is now the goalkeeper coach at Blue Square Premier club Wrexham, where he is working with Chris Maxwell – a Welsh under-21 international who is attracting interest from considerably higher.

“I live very near Dean Saunders just outside Knutsford and know him from when we were together at Villa,” Oakes said.

“When Deano went in as manager of Wrexham, he asked me in to help with the keepers and I’ve been doing that since the start of last season.

“I generally go in on a Monday and Friday, depending on whether we have a midweek game, and I also attend the home matches.”

The 36-year-old also works with Scott Shearer, who once played in a play-off campaign for Shrewsbury, and remains busy in between times by keeping his golf handicap to an extremely competitive two.

He certainly went out of full-time football on a high note, deciding that the 2008 FA Cup final between Portsmouth and his then employers Cardiff would be his last match-day as a player.

Oakes was on the bench for that 1-0 defeat and felt that the niggles his body was suffering made it a good time to end a career of 297 first-team games.

Some 220 of those were with Wolves, from where he headed to South Wales in 2007 and made a further 11 Championship appearances after being reunited with his long-time Molineux boss Dave Jones. 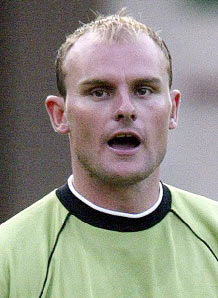 Oakes in his playing days.

“I never did quite make it up to Dad’s appearance tally!” adds Oakes of a man (Alan Oakes) who played no fewer than 669 times for Manchester City. “But who will?

“To have played as many games as he did for one club is amazing. I know people say records are there to be broken but you wonder in his case. With squad rotation, players probably only play a maximum of 35-40 games a season these days, so a player could have ten injury-free years and still not be much past half-way towards his total.”

Oakes Jnr was one of the first ex-Wolves colleagues to have got in touch with Matt Murray when the younger man announced his sad retirement last month.