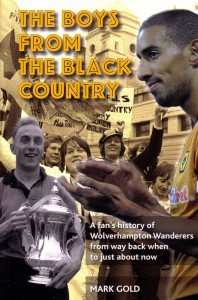 Stories about Geoff Boycott and Henry Blofield commentating together on a Wolves game and Sir Edward Elgar being interviewed in the Molineux match programme are among the tales contained in a new book about the club.

‘The Boys From The Black Country’ is a Wolverhampton Wanderers history, penned by Mark Gold, a fan since being entranced as a seven-year-old by the television coverage of the 1960 FA Cup final against Blackburn.

It’s a story with a difference, though, complete with a comic touch and clever use of anachronisms.

Which explains why Messrs Boycott and Blofeld are said to have sat together at The Oval for Wolves’ 1889 Cup Final meeting with Preston, with one excitedly spotting pigeons and describing the first tram of the day disappearing down the Old Kent Road and the other lamenting: “It’s all very well scoring goals against Old Carthusians and Walsall Town Swifts but it’s how you do against the best players on a difficult pitch that counts.”

The 298-page paperback covers ‘from way back when to just about now’ and reveals a flair that led the author to write a 2008 novel, Cranks and Revolutions, and the highly acclaimed ‘green’ book, Living Without Cruelty (1988) as well as a previous Wolves tome, Under A Wanderers Star (2002).

Of Elgar, the composer whose love of the club has been well chronicled recently, Gold writes particular imaginatively.

“Unlike some members of Slade, Elgar did not hail from Wolverhampton,” he adds. “It is rumoured he cycled frequently from his home in Worcester to watch matches, although nobody has been able to confirm this because the CCTV cameras were not working.

“However, in an interview in the club programme, he confirmed he cycled and usually made it home for Match of the Day. His only regret was that he always missd 6.06 on Radio 5, though he never failed to download the podcast.”

By no means all of this witty work is written in such tongue-in-cheek fashion – or of bygone decades.

Gold also claims that Wolves had the most hated player in football on their staff a few years ago in Kevin Muscat – a defender he describes as ‘capable of the most disgraceful brutality.’

Much more affection is reserved for the signing of Emlyn Hughes, the central defender who skippered the club to their 1979-80 League Cup triumph. 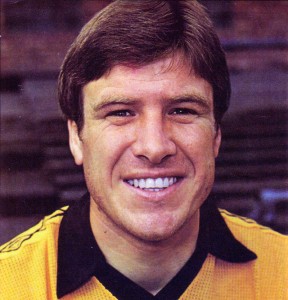 ‘The Boys From The Black Country’ is justifiably described on the front cover as ‘honest, funny, passionate and poignant’ and is worth a closer look .

It is published by Cheltenham-based Sports Books and is on sale for £7.99.