Heroes Turn Out In Force 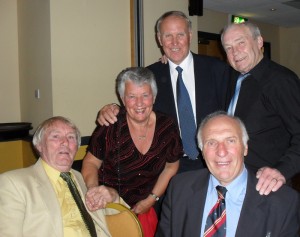 Forming a happy group with Jane and Graham Hawkins are (from left) Dave Wagstaffe, Mike Bailey (front) and Terry Wharton.

An all-star ‘squad’ of Molineux heroes, past and present, attended the Daventry Wolves Supporters Club’s 35th anniversary dinner at the weekend.

Organisers had no problem in naming a formidable Wanderers line-up, with substitutes, from the 200-plus turn-out, which was supplemented by representatives from the club’s corridors of power.

Club secretary Richard Skirrow and director John Gough were also present, as were Graham Hawkins and Graham Turner from the managerial ranks.

“It was a terrific night,” said Daventry Wolves chairman Chris Cox. “We pushed the boat out by having a five-course meal and a live band and were delighted with the turn-out.

“We have most of our dinners in Daventry but come to Molineux for the more special occasions, like the 21st anniversary, the 25th, the 30th and this one.

“We used the evening to make Matt Murray an honorary member of the club. John Richards, Mike Bailey, John Humphrey, Neil Emblen, Kevin Foley and several others already have the same position and it was lovely that several of those were able to attend.”

The formalities included the screening of a Saturday teatime presentation to Kevin Doyle as the Daventry members’ Player of the Year. 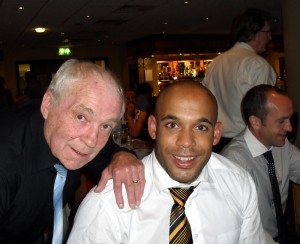 He received his award in the presence of a host of team-mates, including Marcus Hahnemann, Michael Mancienne, Stephen Ward, Christophe Berra, David Jones, Karl Henry, David Edwards and Foley.

The function’s on-going efforts for Cancer Research resulted in around £600 being raised – a figure that takes to over £3,000 the money generated by members’ generosity.

Much more can be read about the club, who have their origins at the Northamptonshire town’s Dun Cow pub, at http://www.ddcwwfcsc.co.uk/