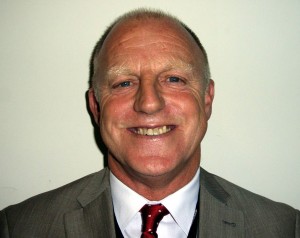 Brian Roberts established himself as a man apart by writing a book, rather than reading one, on his way into training as a Wolves player.

And it was not unusual for him to then have his team-mates in stitches as he read carefully constructed passages of text to them in Molineux’s old foyer.

The result of his endeavours was a witty autobiography called Harry’s Game, which he then launched in 1991, quite literally, by tying the first copy to a rocket on Bonfire Night and sending it zooming skywards from the barren area on which the Stan Cullis Stand was soon built.

“I loved my time at Wolves,” said the popular former full-back. “I usually travelled in on the train because we had a friend who let me park near Coventry Station and I could then chill out as those picturesque Black Country sights appeared at the window.

“It was on that journey that I wrote down a lot of the thoughts for my book. After training, I’d go into town with the likes of Robbie Dennison and Keith Downing for a coffee and a good chat.

“I probably played more games than many people at Wolves thought I would, considering I was in my mid-30s when I went there.

“But it would have been more still had I not had a nagging calf injury that stopped me playing at all in the first team in my second season.

“Graham Turner spent a lot of money on Kevin Ashley but told me I would keep my place if I played well and he was true to his word.”

Roberts has spent the last ten years in the teaching profession and is now in charge of sport at a prep school in Stratford-on-Avon.

The flair he brought to the literary world and to his column in the Sports Argus did have a journalistic spin-off after he retired as a player in 1992. The man who had almost 250 Coventy outings and 213 for Birmingham before his 24 senior appearances with Wolves subsequently reported on games for several years for the Press Association.

But his match-day duties are now confined to working as a corporate host at the Ricoh Arena – a role in which he crossed paths again this week with Bobby Gould. 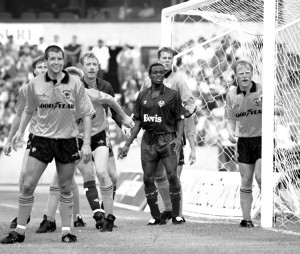 Brian Roberts guards the near post on his League debut for Wolves, at home to Oldham in August, 1990.

“Bobby made me captain of the Sky Blues, then let me go and finally took me back as part of his coaching staff after I had left Molineux,” he added.

“I’ll never forget that my first match as skipper was a friendly away to Benfica, which we drew. My second was a defeat against someone like Bridlington on a tour of North Yorkshire.”

* Gould’s new autobiography, 24 Carat Gould, has this week been in the top 20 in the Amazon sports bestsellers’ list.