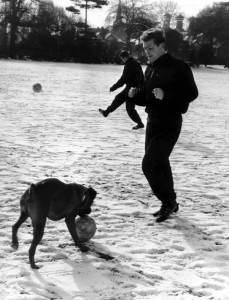 The reason some radical thinking was needed - a big freeze that was good only for some fun between Terry Wharton and a faithful friend.

It was less a tour and more two short hops but rarely have Wolverhampton Wanderers been more relieved to board a plane and find some match practice.

With Britain shivering in the grip of one of its bitterest winters of the 20th century, the vision of Stan Cullis came to the fore once more as he took his squad off on their travels in the second half of 1962-63.

Only once between a high-scoring December 15 draw at Manchester City and a thumping defeat at Liverpool two months and one day later did the weather relent sufficiently for Wolves to play a League game, so the temptation for the club to scan our islands for snow-free surfaces was understandable.

And the search yielded a breakthrough with the discovery that Ireland was green in more ways than one.

The result was that, two days before Wolves were due to stage a home game against League champions Ipswich, a Saturday afternoon friendly against Third Division Coventry in Cork was lined up as a stand-by.

But arrangements were complicated, with the unusual clash subject not only to the referee’s thumbs-down at Molineux but also to a similar judgement at Nottingham Forest, where Wolves were prepared to travel at short notice to have another go at playing a match that had been snowed off the previous weekend.

In the event, England remained under its Arctic covering, so Wolves and Coventry stepped together aboard a charter plane at Birmingham’s Elmdon Airport on the morning of Saturday, February 9.

At 3pm, in front of a 6,500 crowd, they were happily making up for lost time on the southern tip of the Emerald Isle and squelching their way across a mudbath at Flower Lodge, the rustic home of Cork Hibs.

Somewhat less enamoured by the conditions were the three directors who sat next to Cullis on an uncovered bench during the latter stages of a 14-hour downpour that had the manager saying: “I can’t remember rain as bad as that since we played First Vienna in Austria more than two years ago.”

With the ever-present Fred Davies nursing an arm injury, Wolves had the veteran Malcolm Finlayson – unseen in competitive football for ten months – back in goal. 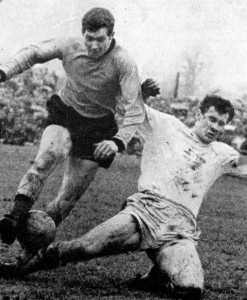 Wharton is challenged by Coventry's Brian Hill in Cork.

And they found it tough going against the elements in the first half before profiting and running out comfortable winners with three goals in quick succession in the middle of the second period.

Man of the match Ron Flowers broke the deadlock in the 55th minute after combining with Chris Crowe to beat Bob Wesson from 30 yards, Barry Stobart made it 2-0 with a lofted shot from an angle and Crowe himself netted the third from 15 yards following Wesson’s error.

The trip was notable as a first sighting of the injury-plagued Ted Farmer at senior level in more than four months.

The centre-forward had started the season sensationally with four of the eight goals that had buried Manchester City on the opening day, then he followed up with two in a big Monday win at West Ham.

He was well shackled in Cork, though, by the powerful George Curtis and would find no quick League comeback, another three months passing before he was fit enough to return for the final three games of the season.

Farmer and his team-mates almost had an overnight stay in Ireland before flying home. Having been grounded by fog for an hour and a half on their outward journey, they were just checking into a hotel because of low cloud when conditions improved and allowed them to return on the Saturday, albeit not until almost overnight.

Any hopes that Wolves would be suitably sharpened up as a result of the trip were scotched when they went to Anfield the following Saturday and lost 4-1 to newly-promoted Liverpool. 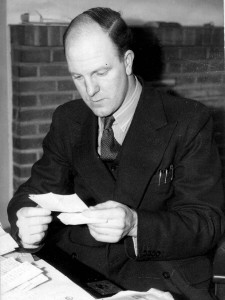 Stan Cullis - found a fellow visionary in the shape of Jimmy Hill.

But Cullis’s men, destined to finish the season in fifth place in the top flight, were also due on Merseyside seven days later and found time to squeeze in another flight over the Irish Sea in the meantime.

This time it was north of the border that they headed to, with Belfast’s Celtic Park the venue for their second meeting with Jimmy Hill’s Sky Blues, who were unbeaten in the League since October and had also faced Manchester United in Dublin during the same big freeze.

Davies was back, so Finlayson dropped out, as did forward Jimmy Murray, for a Wednesday afternoon game watched by a 5,000 crowd in bright sunshine.

And Wolves clicked early on, with Terry Wharton powerfully firing the opener from Crowe’s pass. Brian Hill soon equalised but Farmer, having recovered from a nose bleed, restored the lead by driving in after Alan Hinton had rattled the bar, then the winger went through to lob the keeper and make it 3-1 at half-time.

A by-now rampant Wolves took their tally to six by the mid-point of the second half, Wharton nodding the fourth, Crowe crashing in the fifth after a link-up with Stobart and Hinton popping up in the middle to beat stand-in keeper Meeson.

Coventry pulled two goals back through Ken Hale but the trip, highlighted by Wolves’ 6-3 victory, had more than served its purpose.

And there was immediate pay-back in the shape of a 0-0 Goodison Park draw that was followed by goal-laden wins over Birmingham away (4-3), Albion (7-0) and Bolton (4-0) in the following month.