A Double Tribute To Sir Jack 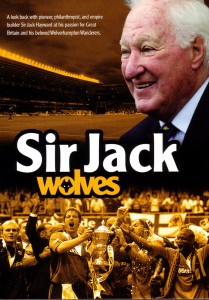 The release of a new dvd chronicling the life and times of Sir Jack Hayward has been marked by a touching poem sent to us by Wolves fan Mick Beech.

It isn’t the first time Wolverhampton-based Mick has felt compelled to write in prose about his Molineux heroes and we are delighted to publish his latest efforts to coincide with ILC Media’s launch of ‘Sir Jack, Wolves.’

It details how a lad born a few hundred yards from Molineux fell head over heels in love with the club, even if he did often then have to follow them from afar as he lived in South Africa, the USA and, for several decades, the Bahamas.

Among the anecdotes are ones from his time in the RAF, his boom years on the edge of the Caribbean and of course his purchase and financing of Wolves for well over a decade from May, 1990.

His patriotism is also highlighted through the discussion of projects such as the salvage of the SS Great Britain and his support for the Gurkha and Save the Vulcan Bomber campaigns.

All those of us who fondly remember that warm, friendly smile and Hayward’s astounding generosity to the Molineux cause and countless others will find plenty to inspire them in this dvd, which is now on sale through the club’s usual retail outlets.

And Mick Beech was moved to write the following:

So he walked into reception shaving his chin due
to difficulty finding a car park with no tariff,
negotiated millions of investment over tea at four,
flogged the lot for a tenner and left his legacy;

The weeds which swayed on windswept terraces where
swaying crowds once watched sweeping passes are gone,
the watching few swelled once more to the watching many,
the weed killer worked and Molineux now pays its own bills,

While a road nearby which might have been called
Golden Tit Street  is instead called the
Sir Jack Hayward Way.