How Legendary Keeper Cut His Teeth At Wolves 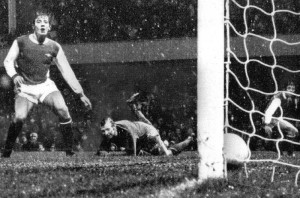 Not a Wolves player in shot as a floundering Bob Wilson is beaten by Derek Dougan's improbable angled finish in 1971.

He may be best known at Molineux for having to pick the ball out of his net five times in 45 minutes on a wondrous afternoon nearly 40 years ago. But there’s another story linking Bob Wilson with Wolverhampton Wanderers that is very much worth telling.

And it’s one that has Stan Cullis at its core.

Not only did The Iron Manager bring the young Wilson to Wolves after spotting him playing for Loughborough College well before the fearless keeper embarked on a career of several hundred games for Arsenal. Furthermore, he stayed in close touch with him long after both had finished their full-time work in the game.

“I had an amazing relationship with Stan and he never showed me anything other than total respect,” Wilson says. “He obviously liked me.

“We probably clicked because I was in education and he had a son at a private school – Repton, I think. We met after Wolves played a friendly against Loughborough College and gave us a good tonking, which would have been bigger still if I hadn’t had a reasonable game.

“Stan came into the dressing room afterwards and made me an offer to sign as an amateur, which I agreed to. It was such a thrill because I had watched Wolves’ famous floodlit games on black and white TV as a kid and thought this guy had such charisma.

“I was registered with the club from 1961 to 1963 and played in their reserves and Midland Intermediate League side before it all came to a fairly nasty end.”

Wilson no doubt impressed the manager, not just with his trademark unflinching bravery during games but with his determination to cross from East Midlands to West just to play in them.

“I used to hitch-hike over to Wolverhampton on Saturdays,” he added. “I remember being picked up in a lorry once. Another time, a mate of mine gave me a lift on his motor bike.

“I didn’t receive any payment in my first year at Wolves and, as a student, I didn’t have much money. But I figured I could save some if I hitched lifts. I used to go into a Chinese restaurant in Wolverhampton before games and have chicken and pineapple.

“Because of his duties at Birmingham University, I loved meeting Bill Slater, who I got to know well after his daughter started at the BBC. I had huge admiration for him.

“Malcolm Finlayson was already a hero as he was such an impressive guy in my position, so was Fred Davies. And, when I stopped over at Bill Shorthouse’s mother’s near Molineux for pre-season training, I was in a room with Peter Knowles, who I found so polite as well as hugely talented.

“They were happy times but I thought there was no long-term commitment and there were a lot of clubs after me when my Loughborough days came to an end. 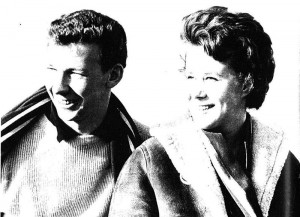 “The fact that my fiancee Megs was a drama student and wanted to go on the stage was as big a factor as any in where I went to play football.

“London was obviously the best place for her, so I rang Arsenal to speak to Bertie Mee, who had watched me playing for British Universities. He was only the physio then but was very persuasive.

“Billy Wright, no less, was the manager and showed me round Highbury. Cleverly, he took me on to the pitch last and it was like walking into a cathedral.

“I signed for Arsenal but it was Bertie who really believed in me and gave me my big chance some years later. Billy signed Jim Furnell and used him for most of the time ahead of me.”

There were two clouds over what was an otherwise extremely happy time for Wilson at Molineux. One came when he was away playing for the reserves at Burnley and he heard that a bomber plane had crashed into the Lincolnshire farmhouse at which his sister and brother-in-law lived, leaving both with serious injuries and killing two maids as well as two flight crew. Ironically, players on both sides were already wearing black armbands that day after a mining accident in Lancashire.

And the parting of the ways is something that leaves a sour taste in the mouth of a man who this week turns 69, having followed up almost 30 distinguished years in the TV industry by helping raise millions for the seriously ill through the Willow Foundation – an organisation set up in memory of his and Megs’ daughter Anna after she died from cancer.

“Wolves tried to block me from joining Arsenal,” he revealed. “John Ireland was aggressive to me. I was there in front of the board, a former grammar school boy wearing my duffel coat and college scarf, and he tore me apart really.

“I had never heard of the word ‘bungs’ but John Ireland seemed to be accusing me of taking one by going to Arsenal. Wolves apparently threatened to take the matter to the High Court but Arsenal agreed to pay £7,500 for me and I became the first amateur to move for a transfer fee.” 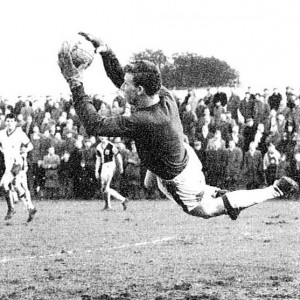 The famous Wilson agility that caught the eye of Stan Cullis almost 50 years ago.

Wilson, having already played as a junior for Manchester United, was spawned from the same Chesterfield ‘academy’ as other outstanding 1960s and 1970s goalkeepers such as Gordon Banks, John Osborne and Alan Stephenson and went on to play every game in the League and Cup when Arsenal won the double in 1970-71.

There was a certain invincibility to their side, not surprising as they had also won the Fairs Cup in 1970. But their record didn’t count for much when they visited Molineux on November 20, 1971.

After a goalless first half, Wolves scored five in the second, much of it played in a blizzard, with the two-goal Derek Dougan at his most genial.

“I remember the game well,” added Wilson, who has written the foreword for Bobby Gould’s recently published autobiography, 24 Carat Gould. “We had a good first half and I think we scored first.

“Then, we were pummelled and what made it worse was that it was shown on Match of the Day by the BBC, who I spent many years with.

“Even during my TV career, Stan Cullis used to send me letters and pass comments. He was very keen to tell me what I should and shouldn’t get into. He thought it was okay for me to talk about coaching, because I had done some of that. But he didn’t think I should comment on management, which I never tried.

“He told me to be very wary of that and he stayed in touch with me for a long, long time.”