Swapping One Stage For Another 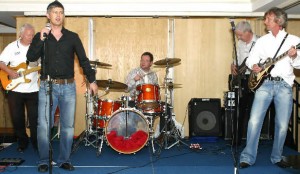 A natural in the role.....Tom (at the mic), with Rodger Wylde on the far right.

Tom Bennett didn’t abandon the limelight altogether with the end of his playing days – a lengthy stint on stage with a band has seen to that.

And it was misfortune in his ‘day job’ that led to a new door opening behind the microphone.

“I broke my leg playing for Stockport against Birmingham in the late 1990s and was so bored during my rehab that I learned to play the guitar,” Bennett said.

“The physio, Rodger Wylde, took it up at the same time and we became part of a new band which we decided just had to be called Fracture!

“All footballers long to be rock ‘n’ roll singers, so it is indulgence really. We have played quite a few gigs around the north-west and raised some money for charity.

“It has just about run its course now because we all seem to have other demands on our time but we have had some great fun performing.”

Bennett, who turned 40 last December, has alternated as lead singer and lead and rhythm guitarist, and Wolves fans will be impressed that Hi Ho Silver Lining is a track they have regularly covered on stage.

Stockport club doctor Steve Greenhough subsequently joined up and played keyboards as Fracture ventured as far afield as Sheffield and provided the entertainment at a gala dinner at County’s Edgeley Park home.

He is employed in the corporate sales department of an office furniture company in Accrington and works part-time in the Blackburn Rovers academy, looking after their under-15 team two nights a week and at the weekend.

“I was brought in there by Bobby Downes just after Rob Kelly went off to Leicester a few years ago,” he added.

“Bobby was my youth coach at Villa before we linked up again at Wolves and it’s nice to stay involved with football.” 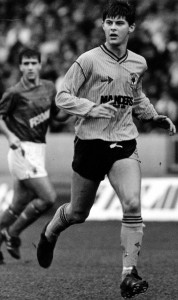 Bennett in Molineux action soon after Wolves' 1989 arrival in the Second Division.

Bennett played 133 games for Wolves up to 1995, making his debut as substitute at home to Southend 22 years ago this week.

He then made a similar number of appearances for Stockport, often with Dave Jones as his manager, before helping Walsall to promotion to the second grade and finally serving Boston, Kidderminster and Hamilton Academical.

There is one other link in his life to Molineux……he lives in Chorley!