A Tale With A Sting

Thomson Tells All And Ruffles Feathers 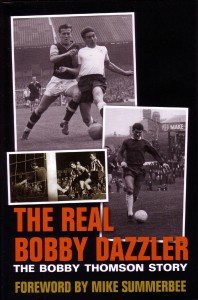 Two appearances for Wolverhampton Wanderers – one of them in a friendly – barely qualify the ‘other’ Bobby Thomson for legendary status at Molineux.

Nor, in usual circumstances, for us to be plugging the autobiography the former inside-forward has just launched.

But ‘The Real Bobby Dazzler’ is no normal story. Revelations and controversy leap out from almost every page.

For a start, the book will make uneasy reading for Derek Dougan admirers, Thomson referring to the centre-forward as ‘a bit of a poser,’ a lodger who outstayed his welcome and didn’t bother paying any rent, and an Aston Villa team-mate who sometimes didn’t fancy playing in away games.

There is also a chillingly full account of the car crash that claimed the life of the former Express & Star sports writer, Malcolm Williams.

Thomson’s colourful recollections, penned by Simon Goodyear, contain some barbed comments about Stan Cullis, a man he was somewhat perturbed to be reunited with at Birmingham towards the end of his career.

No doubt his strong views are influenced by the fact the manager called on him to play in a competitive Wolves match only once.

Thomson marked the occasion – a home League game against Newcastle in April, 1957 – with a goal. A picture of his big moment appears on the front cover and again inside.

Three days earlier, he had netted twice in a floodlit friendly against Valencia but that was that for him at Molineux, although he had also gone on the trip to Russia in 1955.

The Birmingham-based Scot says he does have something to be thankful to Cullis for, though; a decision that possibly saved his life.

One Sunday in January, 1955, the York-to-Bristol express was derailed in Sutton Coldfield, killing 17 people and injuring 25. 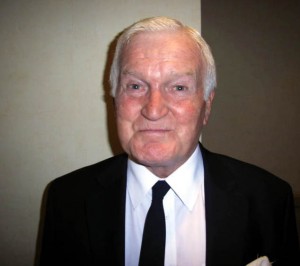 “Little did Cullis know that seven of his players were due to take that train,” Thomson writes. “One of those was me. The others were Colin Tether, Dick Calvert, Harry Middleton, Stan Round, Cyril Bevan and Geoff Sidebottom. Cullis called a meeting for the Sunday and we travelled back on the Saturday instead.”

Thomson has also battled against alcoholism and been a serial womaniser, so his 192-page story (with a foreword by Mike Summerbee) is rarely dull!

* The Real Bobby Dazzler costs £16.99 and is published by Derby Books.