Lee Very Much At Home 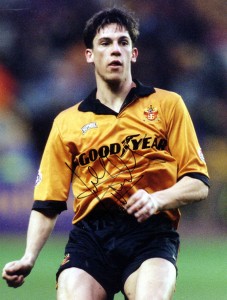 A supporter's signed copy of a Lee Mills photo from his time at Wolves.

It was once said that Robbie Fowler used to buy a house every time he received his monthly pay cheque.

Lee Mills doesn’t claim to have scaled such financial heights but has found a good living in bricks and mortar, happy as he is to get his hands dirty.

“We have a property company and a business selling sports clothing and have done pretty well with the housing,” he said.

“We got into it at the right time and at one stage had 14 or 15 properties. Now it’s five and that probably reflects the difficulties the market is going through.

“The core business is to buy a bargain, do it up and make it suitable for hassle-free letting in a short space of time.

“I’m not too proud to say I will turn my hand to things like tiling and kitchen fitting – with plenty of help from my father-in-law.

“I was a trainee accountant for Barnsley Council before joining Wolves but think I’ve headed too many balls to be sat in an office all day now juggling figures. I’m happier with the physical work.”

Mills turned 40 this year and lives in a small village west of Stafford – ideal for hitting the road in pursuit of his other job of managing Midland Alliance club Bridgnorth Town.

Following his summer appointment, he engaged another Molineux old boy, Tony Dunning, as his right-hand man and the two often travel in together for matches and training.

“We were never at the same club together in our playing days but I’ve known him for about 15 years as we had the same agent,” Mills added. “It was the same guy who also looked after Sean Connelly and Kevin Cooper.

“Football probably takes up more of my time at the moment than anything else, with the need to raise awareness and finance as well as seeing to all the on-field matters.

“When I was taking my coaching badges, I did some training sessions at Shifnal United that were beneficial but this is my first management job in the game.”

There was a certain full-circle aspect to Mills’ playing career as Graham Turner was his first and last manager in the professional ranks.

Having started late in the game as a 22-year-old in December, 1992, he scored four goals in 33 matches for the club – nearly half of them as a substitute. 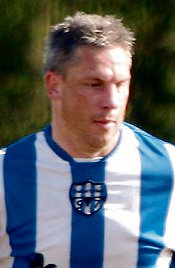 A picture of the striker in more recent times.

He hung his boots up after leaving Hereford in 2005 but, in between, busily made up for lost time by netting 86 goals in 293 League appearances.

In turn, after being sold for £400,000 by Graham Taylor to Derby early in 1995, he served Port Vale, Bradford City, Manchester City (on loan), Portsmouth, Coventry, Stoke, Telford and Hereford.

And he points to his Bradford stay as being his happiest; not surprising considering he scored 25 goals (including home and away against Wolves) in the 1998-99 season in which they won promotion to the Premier League.