One Strange Setting To Another For John 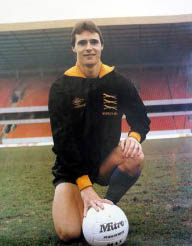 Not many footballers the length and breadth of England had to put up with the sort of eerie atmosphere Molineux generated in the dark days of the mid-1980s.

By leaving Wolves and joining Charlton, though, John Humphrey opened a door to an even stranger existence as part of a nomadic London breed.

In some ways, the full-back found himself playing an away game every week but still savoured good times after a ‘firesale’ that highlighted the depths Wolves had sunk to under Bhatti rule.

“It was not difficult for me to go there as I’m a London boy and it turned out to be a good move, although I had only been there about five weeks when the FA said The Valley wasn’t fit for use.

“We spent five years sharing with Crystal Palace at Selhurst Park, then we moved in with West Ham at Upton Park, so it was an extra challenge. But we managed to grow as a team.

“In my first season, we were runners-up behind Wimbledon in the old Second Division and were promoted.

“The following year, when the play-offs contained one team from near the bottom of the division above, we played Leeds in the final and it was 1-0 at each ground, so we went to a replay at Birmingham. We were 1-0 down with seven minutes to go before Peter Shirtliff scored from two set-pieces.

“I’ve seen Peter on his trips back to Charlton over the years and have always made a point of congratulating him again on those goals because he didn’t score many! 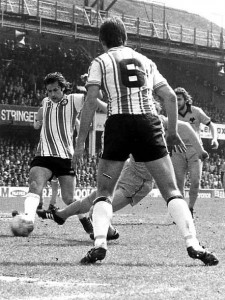 Peter Daniel looks on during a Wolves attack in their 3-0 win at Southampton on the 1980 day on which John Humphrey made his debut.

“I was doing some corporate work at The Valley last season, showing the match-day sponsors a close-up of the pitch and organising them to have their photo taken, when I saw Pete and we had a quick catch-up. I also used to see Andy Gray when Charlton were in the Premier League and Mike Bailey comes here plenty as well.”

Humphrey played 164 games for Wolves from 1980 to 1985 and also spent time with Palace, Reading (loan), Charlton again, Gillingham and Brighton before dropping out of League football in 1997.

He then spent three years as a semi-professional with Walton & Horsham, Carshalton and Cheshunt before going to college in successful pursuit of the qualifications that led to him becoming a PE teacher at Whitgift in Surrey – the school which has Danny Cipriani as one of its old boys.