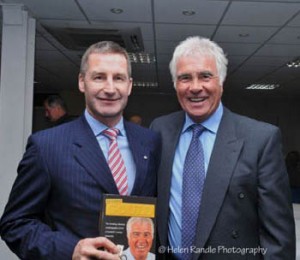 Six defeats in ten games, with an awful lot of goals against, are statistics to suggest that Andy Blair might be best forgetting his brief stay with Wolverhampton Wanderers.

But, more than a quarter of a century on, the midfielder is adamant that life swimming against the tide at Molineux was very good for him.

“I suspect Wolves were better for me than I was for them,” Blair now says. “I was a bit dispirited at not having more of a chance at Aston Villa and was delighted to make the short move on loan.

“Going there was a shining light for me because it gave me the opportunity of playing first-team football that I had been waiting for.

“Yes, the results were poor and it was the start of what came to be seen as a downwards spiral at Molineux.

“But I was conscious of what a great club Wolves were. I enjoyed the nostalgia and heritage of the place and will always be grateful that they wanted me.

“I was only there a couple of months but, on the back of it, I got a great move the following summer to Sheffield Wednesday, under Howard Wilkinson, so it really helped my career.”

Kirkcaldy-born Blair played around 100 games for Coventry and was capped by Scotland under-21s before switching to Villa in time to play a fringe role in their winning of the 1981-82 European Cup.

With Wolves out of their depth after unexpectedly winning promotion back to the top flight in 1983, he then became one of the reinforcements sent for by Graham Hawkins after the club lost seven and drew three of their first ten games back in the elite.

“You are a long time retired in this game and, having had to quit at 27 because of a knee injury, I’ve been retired longer than most,” Blair added.

“But I take pride in having played a few games at Wolves. Graham Hawkins had great integrity and Jim Barron impressed me as a good coach.

“I also enjoyed having players like Kenny Hibbitt, John Burridge and the larger than life Andy Gray as team-mates. It was a good period for me.”

Blair’s Molineux stay took in the duck-breaking 3-1 win at Albion and a 3-0 Boxing Day home victory over Everton, although the club still went down with a bump the following spring.

In his Wednesday career, he made history by becoming the first man to ever score a hat-trick of penalties in a League Cup tie – a feat he managed against Luton in November, 1984. 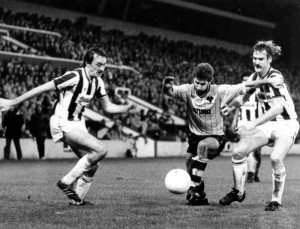 Alistair Robertson, later of Molineux fame, is turned by Andy Blair in Wolves' win at The Hawthorns 27 years ago this week.

He subsequently played for Villa again (when signed by Graham Turner), Barnsley, Northampton, Kidderminster and Nuneaton and had a spell in Malta.

Now resident close to Coventry, he has spent some 20 years selling schoolwear and sportswear and was working until this season as a scout for Stoke.

His match-day duties now are confined to in-house media and corporate work for Villa – the role that brought him back to Molineux for the derby this autumn.