Warring Duo Back Together 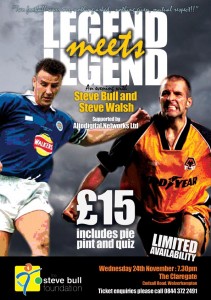 Steve Bull has another meeting with an old foe this week as a reminder of the rampaging mayhem that started 24 years ago today.

It was on November 22, 1986, that the striker was unleashed for the first time in a Wolves shirt following his £64,000 move from Albion.

The Fourth Division home game against Wrexham was the first Molineux audiences saw of him and it’s difficult to believe now that his career with the club began with a trio of 3-0 defeats – Chorley and Lincoln following the Welshmen in meting out the sort of misery Wolves were well used to in their darkest days.

Bull, who didn’t play in the second of those games because he was ineligible for what turned out to be the most notorious defeat in Wolves’ long history, was well into his third appearance in gold and black when he scored for the first time – in a Freight Rover Trophy victory at Cardiff on December 2.

And he had more than 130 goals to his credit by the time he crossed swords for the first time with the man he confronts in more friendly combat on Wednesday night.

His arch adversary Steve Walsh is setting foot in Wolverhampton once more to join him at a Legend Meets Legend evening at the Claregate pub in Codsall Road (7.30pm start).

Tickets cost £15 and include a pint, a pie and entry to a quiz.

So here’s a bit of a refresher for would-be guests in case the following thorny subjects crop up – which they surely will!

It was November 1, 1989, when Bully was sent off for a tangle with Walsh in a 0-0 Second Division draw at Leicester under the watchful eye of England manager Bobby Robson. 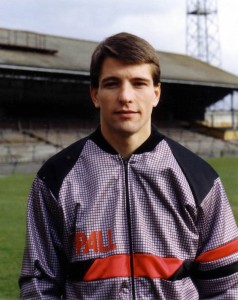 And it was August 18, 1992, when Walsh took an early bath following another set-to between the feuding duo, this time in a 3-0 Wolves win at Molineux.

Finally, lest we ever forget, Bull’s phenomenal goal tally for the club stretched to 306 before chronic knee trouble forced him to hang up his sweat-soaked no 9 shirt for the last time.