Winners Nearly All The Way In Wintry Blasts 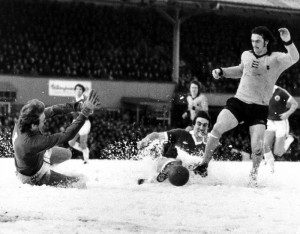 Two-goal Kenny Hibbitt makes it a white hell for Everton in January, 1978.

As English football braces itself for its first wintry interlude of 2010-11, we look back on some snow-hit times of yesteryear.

And history shows that Wolves have generally fared very well in such conditions.

How many of these ten ‘Siberian’ occasions do you recall – and have we missed many?

2. February 19, 1955: Wolves 4 Charlton 1 (FA Cup fifth round): In the same cold snap, just under 50,000 are present to see  Dennis Wilshaw’s hat-trick see off the Londoners. Hancocks is also on target with an individual effort.

3. January 13, 1960: Wolves 4 Newcastle 2 (FA Cup third-round replay): The club’s run to what was to prove to be Wembley glory gathers pace as Cup specialists Newcastle are blown away by goals from Ron Flowers, Norman Deeley, Jimmy Murray and Des Horne.

4. March 1, 1965: Aston Villa 1 Wolves 3 (FA Cup fifth-round second replay at The Hawthorns): A Hughie McIlmoyle hat-trick sees Andy Beattie’s side – newly clad in all gold after a switch from the traditional black shorts – home at the third attempt.

5. December 26, 1970: Wolves 2 Everton 0 (First Division): A memorable Boxing Day for McGarry’s men, especially Derek Dougan, who scores twice to kill off the League champions. The side were to finish the season in fourth place, thus qualifying for Europe.

6. January 21, 1978: Wolves 3 Everton 1 (First Division): Dave Jones is in the visiting ranks as Sammy Chung’s relegation-threatened team take maximum points thanks to a brace by Kenny Hibbitt and one goal by Steve Daley.

7. February 3, 1979: Wolves 1 Everton 0 (First Division): Everton are again the visitors as a side by now managed by John Barnwell edge home on a thick white carpet thanks to Steve Daley’s goal. 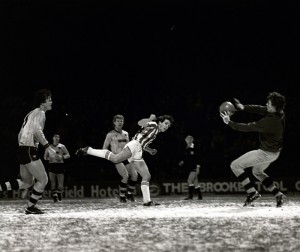 8. November 29, 1980: Wolves 1 Stoke 0 (First Division): League Cup holders Wolves follow up their 4-1 mauling of champions Liverpool by edging this Staffordshire derby thanks to Norman Bell’s goal. It was seriously cold but Emlyn Hughes was among those who chose to play in short sleeves!

9. January 23, 1985: Huddersfield 3 Wolves 1 (FA Cup third-round replay): So Wolves have sometimes lost in the snow…..the club’s slide is underlined by defeat against Second Division rivals Huddersfield in front of only 7,005 at Leeds Road. Alan Ainscow scores for Tommy Docherty’s side.

10. February 9, 1986: Walsall 1 Wolves 1 (Third Division): A first-half Micky Holmes goal proves enough for a welcome point for a team by now under the management of Sammy Chapman. As a sign of the changing times, this fixture was played on a Sunday lunchtime.