Jinky’s Foot In Both Camps

Full-back’s Steps On The Coaching Ladder 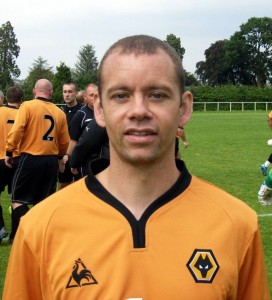 Jamie Smith - about to go into action for Wolves All Stars this season.

Less happily, he was then sent off in a defeat in the return clash at The Hawthorns the following spring.

Now, a decade and a half on, he has served as a youth coach on both sides of the divide since injury forced his retirement as a player more than three years ago.

Smith, who lives near Bromsgrove, has worked both with the Baggies under-13s and in Wolves’ academy, having hung up his boots in 2007 while playing for MK Dons.

“I started to feel my knee just before the Christmas and tried a couple of comebacks but it kept locking on me,” said the 36-year-old former full-back.

“I’d had five cartilage operations on the same knee and the specialist had told me it wasn’t looking good.

“It was virtually bone rubbing on bone, so it wasn’t a big shock when I had to pack up. It had been coming.”

The Brummie leapt almost from nowhere into Wolves’ side when given his debut by Graham Taylor against Mark McGhee’s Reading on the opening day of 1994-95.

His dismissal came following a running battle with Albion winger Lee Ashcroft during a second half to the campaign in which he was used much more sparingly.

But Taylor’s successor McGhee again made him a regular and he went on to play 104 times in all for the club as well as become the ‘bait’ in the excellent deal that brought Dougie Freedman and Kevin Muscat from Crystal Palace in exchange for him.

It was while he was with the Londoners – against whom he struck in the 1997 play-offs with his only Wolves goal – that Smith beat his former employers to the Premiership. 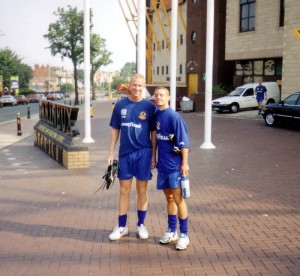 One season of his 175-game stay at Selhurst Park was spent in the top flight and, when he was loaned to Fulham, he found himself playing under a third ex-England manager (Kevin Keegan) after serving Taylor at Wolves and Terry Venables at Palace.

Smith also played around 50 games for Bristol City and on loan to Brentford before his MK career was halted after only 17 League matches.

He subsequently had a spell with League of Wales side Airbus UK while taking his coaching badges.