Wolves All Stars have squeezed another fixture into their successful 2010 schedule.

The game is in aid of the Neo Natal Unit at Wolverhampton’s New Cross Hospital and has been hastily arranged following a request from Midlands boxing legend Nigel Rafferty.

The former Midlands cruiserweight champion is a keen Wolves supporter and has played many times for the All Stars – a side in which his son Josh has also appeared.

The squad were saddened to hear that Josh’s daughter, Mia, was found to have a fatal heart condition after her birth on October 3.

“She may live to reach her first birthday – we don’t know,” said All Stars player-coach Mel Eves.

“She is affectionately known as Mia Moo and, in her honour, we wish to raise money in grateful thanks to the Neo Natal Unit for the quality of care shown to her and also to support her parents in their time of need.” 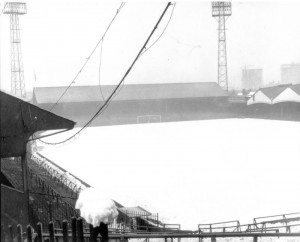 Wintry times at the old Molineux.

As ever, former Wolves players are cordially invited to attend even if they aren’t playing.

* Our thanks to the response we have received after asking for readers’ memories of snowy days and nights spent following Wolves.

Malcolm Rodgers asked whether anyone recalled a white blanket covering for the FA Cup home tie against Rotherham in 1965.

And, much more recently, we were reminded by Steve Timmis that snow lay on the ground when Tottenham were beaten by Dave Jones’s early goal at Molineux last season.