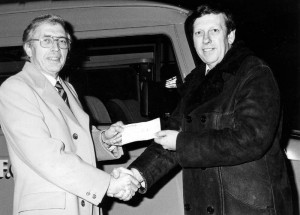 Dick Homden, the forgotten director in Wolves’ rise from near oblivion, has died at the age of 78.

The Shropshire businessman was the club chairman who oversaw both the appointment of Graham Turner as manager in October, 1986, and the signing of Steve Bull a few weeks later.

In fact he and Jack Harris, who had previously sat together on Ken Wheldon’s board at Walsall, personally funded the purchase of the striker and his Albion team-mate Andy Thompson for an initial £70,000.

But, while Harris subsequently took up the chair and had one of Molineux’s gleaming new stands named after him in 1993, Homden disappeared from football view.

His surprise departure from Molineux in the summer of 1988 was said to have been because of a disagreement with then owner Tony Gallagher – a sad end at the club for a man who had done so much.

Homden remained true to his roots, though, and for several seasons became a season ticket holder, watching from the John Ireland Stand as the recovery he had kickstarted gathered pace.

It saddened him that his axeing from the board also cost him his long friendship with Harris.

But he had played his part as a powerful supportive influence at a time when Wolves and Turner most needed it. His role will not be forgotten or underestimated by those who witnessed it.

Homden, who lived just outside Shrewsbury, did not have the charisma of a Sir Jack and will be remembered more for being unassuming, level-headed and studious. 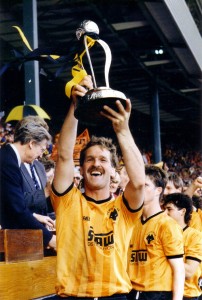 Alistair Robertson with the Sherpa Van Trophy - a triumphant last match in charge for Dick Homden.

He wasn’t one for going in the dressing room and getting under the feet of the professionals – and that’s not just because he was often to be found puffing on a cigarette!

He brought stability, though, especially in those early Fourth Division days when Wolverhampton Wanderers were still hitting as many troughs as peaks.

Dick Homden died on Thursday at home following an illness and leaves a widow Gillian and six children.