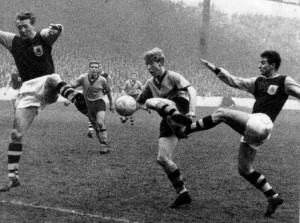 Alan Hinton, watched by Bobby Mason, goes on the attack for Wolves in their 3-3 draw at Burnley in November, 1961.

Alan Hinton has used his latest trip back to the West Midlands to express his continued gratitude to Wolves for helping win him a League champions medal.

The early 1960s Molineux winger flies back to Seattle tomorrow but has included a match-day visit to the stadium, a walk on the pitch and a thanksgiving dinner at Marcus Hahnemann’s house during his stay.

He even bumped into John Richards in a watering hole on the outskirts of Wolverhampton and said a belated thank-you to him for the famous win over Leeds in 1972 that unexpectedly took the title to Brian Clough’s Derby.

“It was lovely to see John again,” Hinton told us from his pre-departure base in Derby.

“My brother lives in Pattingham, so we were among Wolves fans in the Pigot Arms anyway when I met John.

“We missed being team-mates at Wolves by a few years but I knew him well as a good opponent and of course I’ll always be grateful to him and the rest of the people at my first club for what they did in 1972.

“We had finished our programme and were away in Majorca, believing that Liverpool or Leeds would win the title.

“They had games left against teams who didn’t particularly need to win, so we didn’t think it was possible that we could be crowned champions.

“But, on the Monday night of the two games, one of our coaches, Brian Newton, came in and said we had won it. We thought he was winding us up and one of the lads grabbed him round the neck and told him not to take the mick. But it was true.

“Wolves played brilliantly by all accounts to beat Leeds and it seems Bill McGarry took a leaf out of Brian Clough’s book. All the bribery stories were flying around and it was probably right up Bill’s alley because he insisted that Wolves should play out of their skins to show they were above all that.”

Hinton, who also watched Derby’s Championship home game against Norwich on Saturday two nights after a reunion of former Baseball Ground heroes, had already expressed gratitude to a Wolves player in the unfolding drama of 38 years ago.

In 1982, as head coach of Seattle Sounders, he signed Kenny Hibbitt for an American season, only to become embroiled several months later in a few choice words with those in power at Molineux.

“The deal was actually done during Doug Ellis’s brief time in charge and was set up by Tony Penman, the scout from Wolverhampton,” he added.

“We paid £15,000 for Kenny for the summer and he was fantastic for us. But Derek Dougan took over at Wolves in the middle of that year and was unhappy that he was going to be without such a good player for the first few weeks of the English season. 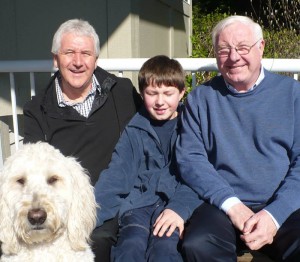 Hinton (right) with grandson Matteo and his good friend Les Wilson. Completing the quartet is the latter's golden doodle Scholesy.

“The Doog threatened me with everything and I said a few things back to him, then I remembered that he had scored that night against Leeds to win me a champions’ medal. So I said: ‘Forget it, can we have a drink instead?’

“My only regret in 1972 was that we were away on holiday when we heard we were champions. There was dancing in the streets back home and I would rather have been there with my family.”

Wednesbury-born Hinton, who was featured at length on this site late last winter, played 78 games for Wolves and scored 29 goals before leaving for Nottingham Forest in 1964.