Not Such A Nice One, Cyril! 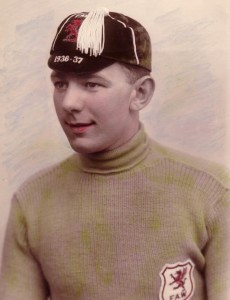 Last week’s feature on the winter freeze that took the 1946-47 Football League season to a June climax led us to look closer at the part played by one of the central figures in that thrilling title race.

Cyril Sidlow played extensively for Wolves during the war after costing them a princely £100 when signed in 1937 following spells in his native North Wales with Abergele, Flint Town and Llandudno Town.

But the former understudy to Alec Scott appeared in only four First Division matches for the club and had departed to Liverpool by the time the two sides met in what turned out to be the championship decider at a sweltering Molineux in the first full season of competition after the war.

What made Sidlow’s role in the drama even more remarkable, though, was that he still lived in Wolverhampton – less than a goal kick away from Bert Williams, the man who had replaced him in Ted Vizard’s side.

“He trained with Wolves throughout the week and linked up with us on match-days only,” wrote the Liverpool legend Bob Paisley in his ‘My 50 Golden Reds’ book.

“So you can imagine what it must have been like for him having to walk down the streets towards Molineux that Saturday afternoon. They were his mates he was playing against and he knew that, unlike us, he would have to suffer whatever the result.

“If we won – and deprived Wolves of the title – he knew he wouldn’t be able to walk out of the front door of his little house in Wolverhampton without folk pointing to him as the man who had stopped their team becoming champions of the Football League for the first time.

“The strain on him must have been enormous but you would never have known it as he turned in one of his most polished performances ever to help us to a 2-1 win – and the championship.”

Wolves had won 5-1 at Anfield earlier in the season, with Dennis Westcott scoring four, but Williams acknowledged: “Cyril played well that day at Molineux and they were a much tougher nut to crack.”

Sidlow’s brief League career at Molineux included the infamous 10-1 win at home to Leicester in 1938, in which he hurt his shoulder and conceded an own goal following a mix-up with Stan Cullis.

He then played frequently in the Army team, especially in Italy, taking turns in goal with Frank Swift.

But Williams’ emergence prompted the club to sell him to Liverpool for £4,000 in February, 1946.

And it was with the Merseysiders that he brought pain on Molineux on the day Liverpool ended Wolves’ hopes of becoming champions for the first time.

I met Cyril as he spent his final years at a house in Codsall just round the corner from the Broadbent household.

Although struggling with his hearing, he laughed at my mention of the fact that he and Williams lived so close and found themselves in opposition both on that big day and in a subsequent England v Wales international.

“We had our picture taken once in one of our gardens, which virtually backed on to each other,” he said.

“Then, after I had received my League champions’ medal, I took it round to Bert to show him. I don’t know whether he appreciated that very much!

“But he got his hands on one as well a few years later, which I was very pleased about.”

Sidlow played 165 competitive games for Liverpool before a friendly turn cost him his career there. 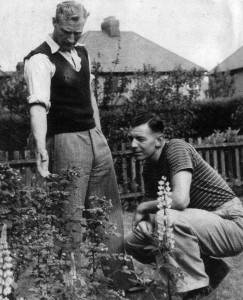 He had been mates in the Army with a Russell Crossley, who used to stand in for him in the Army team so he (Sidlow) could play wartime games for Wolves. He recommended after the war that Liverpool manager George Kay should sign Crossley – and the younger man took his place in the team!

Cyril, born in Colwyn Bay in 1915, was given a free transfer and resumed his trade as a carpenter, moving back to the Wolverhampton area with his wife.

He died in 2005, a few months short of his 90th birthday – a landmark Williams attained early this year.