Stepney, The Doc and Wolves 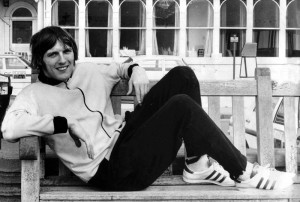 Gary Pierce - good for more than just the bench.

Exactly two weeks before the Wembley date, the keeper had also broken the hearts of Tommy Docherty’s United – this time with a contribution that ended his opposite number’s long-forgotten alternative role.

Wolves Heroes’ David Instone was recently despatched to Old Trafford to interview Alex Stepney for the excellent Backpass nostalgia magazine and took the opportunity to chat with the European Cup winner about the 0-0 draw between the clubs late in February, 1974.

“Amazingly, I had been joint top scorer for United up to Christmas,” Stepney said. “And all because of a penalty-taking career that ground to a halt after we faced Wolves.

“I scored one in a pre-season tournament in Spain and, just before we went out for a game at the start of the season, Tommy Docherty told Martin Buchan that I was the nominated taker.

“Well, we were awarded one in a night game against Leicester a few weeks later and I ran from the Stretford End to sidefoot it past Peter Shilton into the corner.

“I put another one past Mike Kelly of Birmingham that autumn and was joint leading scorer with those two goals until half-way through the season. And I still had the job when Wolves came here a couple of months later.

“It was at the Stretford End and I recall seeing Gary Pierce move just as I was about to hit it. I smashed my shot and the ball cannoned off his shin and went out for a throw-in if I remember right! And that was it – the end of my penalty career there and then.”

Stepney, proud holder of European Cup, League Championship and FA Cup winners’ medals following his monumental United career, has revealed that Wolves watched him in the mid-1960s as a Millwall player. 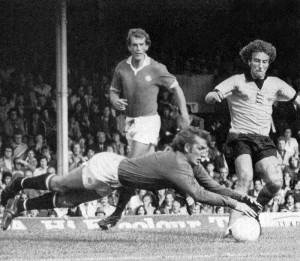 And they had an extra set of ‘eyes’ to monitor his progress as their late full-back Bobby Thomson was a team-mate of his with England under-23s for internationals at Norwich, Southampton and Blackburn, the last of which also had another Molineux representative in Ernie Hunt.

Instead, Docherty, who had an unsuccessful brief spell as Wolves manager in 1984-85, took Stepney to Chelsea and then sold him to Manchester United after giving him a solitary first-team game at Stamford Bridge.

“We had some good games against Wolves,” the keeper recalled. “I suppose they were about even overall and we knew we were always in for a hard time when Derek Dougan and John Richards were playing together.”