Mardenborough On THAT Goal 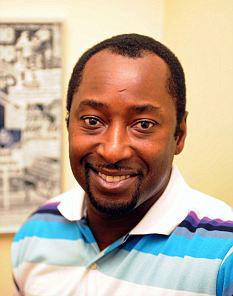 Steve Mardenborough did not realise, until we pointed it out, that Wolves are due at Anfield next Wednesday for the 2010 staging of the fixture that made his name.

But, more than a quarter of a century on from his stunning eclipse of Joe Fagan’s all-conquering side, he insists he will be happy to shed his tag as the last Wolves player to score a winning goal there.

“I will be delighted when Wolves next win at Liverpool,” he said. “I know it will mean my record has gone but it has stood for long enough.

“My mum said they can’t take that day away from me whatever happens in the future.”

Despite a seven-game run in the first team that had ended a month earlier, the teenage Mardenborough was actually with the reserves and youths when Graham Hawkins’ Wolves were preparing for a January 14 trip to the Merseyside fortress in 1984.

“Frank Upton was taking us for training upstairs that Friday morning in the old Wolves Social Club when the physio Dennis Conyerd came up and had a word with him,” the Birmingham-born forward recalled.

“I lip-read Dennis and realised my name was being mentioned. He told me while we were going downstairs that Mel Eves had tweaked his knee and I was needed with the first team.

“I still didn’t think I would play but Jim Barron informed me at the pre-match meal that I was in the starting line-up.

“Alan Hansen was playing for Liverpool but Jim still said that, if Danny Crainie or Tony Towner got past their full-back and put in a cross that I didn’t get on the end of, he would want to know why.

“Sure enough, fairly early on, Danny slipped past Phil Neal and centred. Hansen and Steve Nicol went for it but I managed to get some head and some shoulder on it and the ball looped over Bruce Grobbelaar into the net. 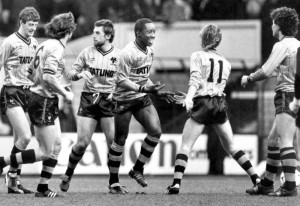 Steve (centre) celebrates his Anfield exploits. This photo was one of 400-plus used in the Wolves In Pictures book produced in partnership with the Birmingham Post & Mail.

“I apparently cost a lot of people money that day because Liverpool were the champions and on their way to winning the title and a home game against us was seen as a banker.”

Mardenborough, now 46 and resident for many years in South Wales, is actually the only Wolves match-winner at Anfield since 1950-51, when goals by Johnny Walker (2), Roy Swinbourne and Dennis Wilshaw gave the club a 4-1 victory there.

His tale is all the more remarkable for the fact he started only one more game for the club, his 11-match Molineux career having contained that solitary famous goal.

Come the end of a 1983-84 campaign in which Wolves dropped like a stone, he was released along with the likes of Billy Livingstone and David Wintersgill and, having previously played for Coventry, started a long trawl round the lower divisions and non-League.

“I scored for Newport against Wolves in the mid-1980s in the Third Division but don’t think I’ve been back to Molineux since the day I left,” Mardenborough added.

“I had some contact with people from there because Jim Barron took me to Cheltenham, where Andy Gray was on the playing staff, and Brian Little was my manager for two and a half years at Darlington.

“I have been invited up to Wolves and Mel Eves has asked more than once if I can play for his All Stars team. But I haven’t been able to manage it yet.

“I play down here for Cardiff City Legends and have a son who plays for Newport County under-16s, so I am still involved with the game. I’ve also done some coaching myself at Cardiff.”

Mardenborough, whose wife Lesley is from Walsall, still enjoys the outdoor life as he has worked since 2002 in maintaining railway tracks.