Fond Memories Of Playing In All Sorts 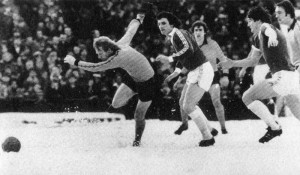 John McAlle looks on as Willie Carr slides into action against Everton in February, 1979. On the right is Norman Bell.

To fans of a certain age, last weekend’s televised Championship game between Ipswich and Leicester will have induced considerable pangs of nostalgia.

The sight of a snow-covered pitch, an unusually coloured ball and specially marked lines was a throwback to the distant days before clubs had under-soil heating.

Time was when such spectacles were a twice-or-thrice a season occurence – and many of us mourn their virtual extinction.

“As a defender, you would occasionally encounter a forward who didn’t fancy it as much in the cold and I loved being able to start a slide tackle ten yards from the ball!

“I recently saw a recording of the game at Chelsea in the Second Division when we played on a pitch covered in either snow or frost.

“We played in a blizzard the day we beat Arsenal 5-1 at Molineux and there was that UEFA Cup tie away to Carl Zeiss Jena, when it was very, very cold, with plenty of snow about.

“I doubt whether matches would be played in those conditions very often now. Even if the pitch was passed fit, there would be health and safety worries.”

McAlle has no yearnings to have played in an era, like the present one, in which nearly all pitches are in the same pristine state.

“The game seems a lot more sanitised now,” he adds. “If it wasn’t flattened snow, we were liable to encounter four or five inches of mud. 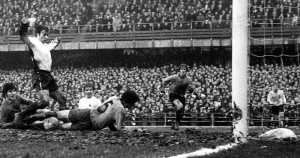 Phil Parkes and Frank Munro at the centre of mud-bound capers at the Baseball Ground in 1971.

“Anyone who saw our games at Derby in the early 1970s will know what their pitch was like. You struggled to move the ball and the games could become kick-and-rush but they always seemed to be exciting.

“You could get heavy conditions at Burnley and West Ham as well, depending on the time of year, and at many grounds the only real grass was on the wings.

“That said, I don’t recall many games being postponed. Even if the centre circle and penalty areas were a mess, you generally played – and made sure you moved round a lot to keep warm!”