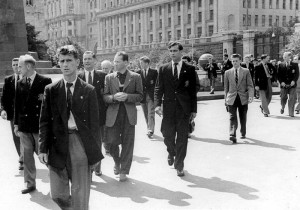 The tall Nigel Sims (centre, in jacket with club badge) strides out with his Wolves colleagues on the trip to Moscow in 1955.

His League debut came for Wolves at the age of 17 at Sheffield United on Easter Monday in 1949 and his second game was against the Blades the very next day.

Not many players down the years have made an entrance like that and he recalls: “We often used to play the same opponents on successive days at Christmas and Easter and my first two matches in Wolves’ first team were in the space of 24 hours or so.

“Bert Williams was injured not long after playing brilliantly in the FA Cup semi-final against Manchester United and I went into the side in a 1-1 draw at Sheffield.

“The team had already set off but Stan Cullis organised it for a member of the Everall family to come and pick up me and another reserve goalkeeper, Dennis Parsons, by car when he realised Bert was struggling.

“Bert was declared unfit and I thought Dennis would play, so I was reading the programme in the dressing room when Cullis said to me half an hour before kick-off: ‘Come on, what are you doing? Get changed – you’re playing.’

“Things went okay, then Sheffield came to our place the next day and lost 6-0, so it was nice to get an early clean sheet.

“I kept my place for a third match, at home to Manchester City, and the FA Cup final was the Saturday after that. But Bert recovered in time. It would have been quite something for me, as such a young deputy, to play at Wembley!”

Wolves, who had already given Parsons a debut in that triumphant 1948-49 season, had cause to send for Sims in further dramatic circumstances six and a half years later.

Because of Williams’ continued excellence, the young pretender had still played only 35 senior games by the time he was summoned to London over Christmas, 1955.

Again, the side were playing the same opposition on consecutive days and Williams, having been expected to recover in time from a shoulder problem picked up in the 3-3 home draw with Arsenal, was belatedly ruled out of the re-match the following day.

Sims was once more driven from Wolverhampton by car as a result, arriving at Highbury only 25 minutes before kick-off but acquitting himself impressively in a 2-2 draw. 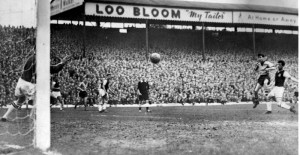 A half-hidden Sims under fire from Wolves in Villa's FA Cup semi-final defeat at The Hawthorns in 1960.

Now in his 80th year and living in South Wales, this product of Burton-on-Trent did not remain at Molineux much longer.

As Parsons had done five years earlier, he left for Aston Villa in March, 1956, winning the FA Cup with them in 1957 and also making two appearances for the Football League against the League of Ireland, the first of which was marked by a goal from his former Molineux team-mate Peter Broadbent.

While he was a Wolves player, Sims had also appeared alongside Duncan Edwards and Dennis Viollet for Young England against England at Highbury in the traditional eve-of-cup-final fixture.