Barron Run Was A Fleeting Affair 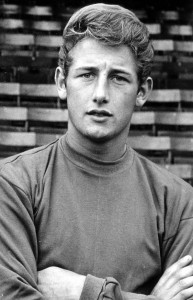 The young Barron at Molineux in 1963.

It says something about Wolves’ magnetism that Jim Barron was ever attracted to Molineux from his native north-east.

Newcastle, who he supported as a boy, were on his trail; so were Sheffield United. But there was just a special pull about the club who had won the League three times in the keeper’s formative years and the FA Cup soon after.

“I played for the county and then in a local team,” Barron said. “Newcastle wanted to sign me but I really preferred to stand on my own two feet and move away.

“I had been to Wath Wanderers a couple of times to play and found it quite easy to join Wolves when they came in for me.

“They were still such a big name in the game with great characters and Stan Cullis was an absolute legend.

“I came down to the Midlands with a right-back called Paddy Rickerby and we played together in the side who reached the FA Youth Cup final in 1962. He went to Wellington Town later and was probably the only one in that Youth Cup team who didn’t go on and play League football.”

By coincidence, Wolves faced none other than Newcastle in the final 49 years ago, having won 4-1 away in the fifth round away to an Aston Villa side containing George Graham and hammered Chelsea 4-0 on aggregate in the semis.

The Magpies were thankful to escape with a 1-1 draw in the first leg after John Galley had opened the scoring in front of 13,916 at Molineux.

Galley had a goal disallowed in the return, with the crowd of 20,588 only marginally below the gate for the last one at St James’s Park in the Second Division campaign that had just finished.

By then, a Wolves side captained by David Woodfield were trailing 1-0 on the night to a 58th minute Bobby Moncur header from a corner resulting from Barron’s superb fingertip save to a shot from Alan Suddick. And that’s how it finished.

There was no shortage on either side of lads who ‘made’ it, Newcastle’s team also containing David Craig while Bill Shorthouse’s Wolves had a 16-year-old Peter Knowles in this line-up: Barron, Rickerby, Thomson, Goodwin, Woodfield, Knighton, Povey, Kemp, Galley, Knowles, Calloway. Kemp had replaced Attwood from the first leg.

Barron had to wait another season and a half for his senior debut, on which he had the satisfaction of keeping a clean sheet in a Molineux draw with League champions Everton.

Fred Davies soon returned from a slight injury he had suffered on the training ground but another opportunity quickly presented itself to the 20-year-old Barron, a 2-0 win at Stoke proving the start of a five-game run in the team either side of Christmas.

Alas, Wolves were on the slide and the newcomer’s taste of first-team football was short-lived.

“Too many good players had gone and not been properly replaced,” Barron added. “We were starting to struggle and, when I played my last League game for Wolves early the following season, we were conceding too many goals.

“We lost 4-1 at Blackburn, Stan went just after and that was about it for me at Molineux.”

He did remain at the club for a few more months but the writing was on the wall with the signing of Dave MacLaren, so Chelsea swooped for him, tonight’s Molineux match programme relating the story of how the seeds for the deal had been sewn when Barron played for the Londoners against Wolves on the 1964 Caribbean tour the two clubs went on.

The breakthrough at Stamford Bridge was a false dawn. The County Durham lad played only once in first-team football under Tommy Docherty – against Stoke – but then flourished at Oxford and Nottingham Forest for many years and at last clocked up the sort of senior service his father, also a Jim, had managed at Darlington, Blackburn and Bradford.

Moves remained plentiful; to Swindon and Connecticut as a player and to Peterborough as player-coach under John Barnwell, the man who would bring him back to Molineux in the early 1980s. 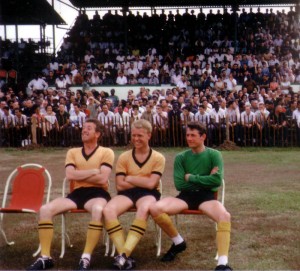 Caribbean capers from Barron (right), Graham Hawkins (the man he was to link up with in the Molineux backroom almost two decades later) and Peter Broadbent.

Saudi Arabia, Iceland, Mansfield, Cheltenham, Everton (as goalkeeper coach and now scout), Villa, Wycombe, Sheffield United, Birmingham, Crystal Palace and Northampton have all since figured on a CV lengthy enough to ensure we will be featuring him again on this site.

Barron is still going strong in the game at 67 and is now resident back in Birmingham following nine years living near Ascot.

* When Wolves faced Nottingham Forest at Molineux in January, 1964, Jim Barron was in goal for the home side, who also included Alan Hinton and goalscorer Chris Crowe. Hinton and Crowe moved to Forest within a year and Barron went there later. Wolves lost 3-2 after leading 2-0 and Joe Wilson and Dick Le Flem were in the playing ranks at Forest, whose winner came from Frank Wignall. All three players subsequently moved to Molineux.