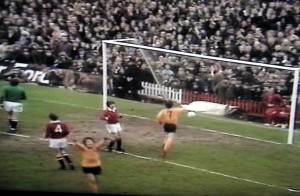 Scorer John Richards and no 7 Jim McCalliog celebrate the goal that put Wolves two up at Old Trafford. Pictures are taken off Granada TV's extended highlights.

With Wolves fans still basking in the glory of Wednesday’s thrilling conquest of Chelsea, we look back to when the club brought down another of the game’s giants.

Thirty-nine years ago this weekend, it was a 3-1 triumph over Manchester United that made the football world stop and stare, especally as it was achieved at Old Trafford.

United, under the management of Frank O’Farrell, were top of the League at the time but Bill McGarry’s Wolves were on a terrific run of their own, victorious in their previous three games and unbeaten in ten.

Amid a complete lack of talk about fatigue and squad rotation, Wolves had played and won the first six of the 12 matches they would play in that season’s UEFA Cup, with trips to Portugal, Holland and East Germany behind them. Indeed, they had selected the same side for ten games in a row.

They were still seen as underdogs when they set foot in front of 46,781 on Saturday, January 8, 1972, but maybe George Best was a good judge. He skipped training and a meeting with them and was instead spotted the night before on the arm of Miss Great Britain Carolyn Moore – an indiscretion that cost him a ban and two weeks’ wages.

We at Wolves Heroes have recently come by around 50 minutes of colour highlights of the game and can relate how the visitors tore into United with a vengeance.

They won two corners in the first three minutes and were two up well before half-time, Derek Dougan’s head directing home the first in the 21st minute after Jim McCalliog’s over-hit cross from the left had been returned to the goalmouth by Kenny Hibbitt.

The Doog turned provider when he flicked on Frank Muno’s long free-kick for John Richards to race through and mark his first appearance at the ground with a characteristic right-foot finish for no 2.

Richards had earlier seen a shot blocked on the line by David Sadler and Wolves remained the better side when attacking the Stretford End, which had a huge swathe out of use right behind the goal.

Alex Stepney brilliantly saved an effort by Richards, whose low cross-shot then caused such panic in United’s defence that Tony Dunne tripped Hugh Curran, leaving McCalliog to score from the 75th minute penalty.

Chants of ‘Easy, Easy’ are to be heard on the footage, with commentator Gerald Sinstadt calling Wolves the most consistent side in the country after identifying early in the game that United faced a ‘man-sized task’ against them.

Curran was on as substitute after Dougan had been carried off with a pulled muscle in his leg and it was only after Sammy Chung also helped Hibbitt off and briefly left Wolves with ten men that Unted pulled one back five minutes from time through Best’s replacement, Sammy McIlroy.

What made the victory all the more eye-opening was that Wolves hadn’t scored in five trips to Old Trafford.

It was an outstanding performance, with the likes of Dave Wagstaffe, Bernard Shaw and skipper Mike Bailey all frequently catching the eye. ‘Wolves Were Just Superb’ read the Express & Star headline two nights later. 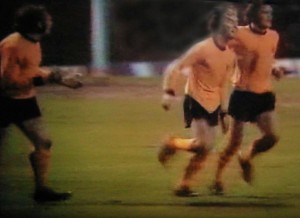 And here are our observations from the extended coverage – apart from the sight of parka coats in the crowd: The cameras never picked out McGarry, O’Farrell or anyone else sat on the benches, there were precious few action replays and there was no waving at the end of the game to the visiting supporters, who seemed to be situated in small clusters at the Scoreboard End.