Play That One Again! 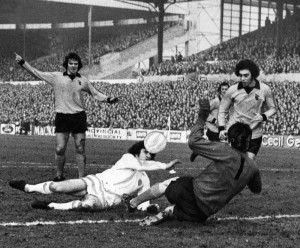 Awkward moments for Phil Parkes, Frank Munro and Geoff Palmer at Leeds in January, 1974 - an FA Cup Wednesday afternoon replay that was still attended by 42,747.

Unwelcome though Wolves’ second FA Cup meeting with Doncaster initially appeared to be, it can be seen as a good omen.

Some of the club’s most exciting FA Cup journeys have been laden with replays, a few of them heavily so.

When they opened their run with a 2-2 away draw (sound familiar?) in January, 1960, they went on to lift the Cup four months later.

Newcastle, the competition’s team of the 50s, were their first opponents then as Wolves had to replay for the first time in almost a decade.

In 1964-65, a roller-coaster ride to the sixth round contained no fewer than eight matches as the side taken on by Andy Beattie required two stabs to beat Portsmouth and Rotherham and three to defeat Aston Villa.

The 1967 replay KO at Everton was the last time Wolves played in front of a 60,000-plus attendance in the competition while there was also a collectors’-item touch to their eclipse at Leeds in 1974 – the re-match at Elland Road was played on a Wednesday afternoon because of power cuts which precluded the use of floodlights.

Wolves ousted Ipswich in home replays in both 1976 and 1977, on the first occasion going out two rounds later in a second clash with Manchester United, and went to the semi-final in 1978-79 after overcoming Newcastle and Shrewsbury at the second attempt.

And, in 1980-81, they needed two games to account for Stoke, Watford and Middlesbrough before Tottenham did for them in the semi-final at Highbury following a draw at Hillsborough. 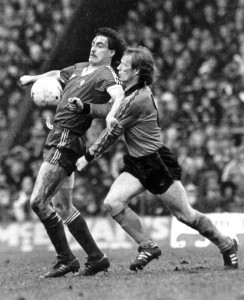 Willie Carr up close and personal at Ayresome Park in 1981 as Wolves and Middlesbrough head for an FA Cup quarter-final replay.

On another journey to the last four, Wolves prevailed in home replays against Charlton and Wimbledon in 1997-98 while the unforgettable shoot-out drama against Sheffield Wednesday in 1994-95 and wins at Ipswich and at home to Birmingham are other fondly remembered prolonged ties from that decade.

Having extra bites at the cherry in the Cup hasn’t always been good for the club, though.

Coventry (in a third meeting) and Huddersfield defeated them in the 1980s and, as for Chorley, we just won’t go there…..