Out Before A Ball Was Bowled!

Barry Up And Away From Down Under 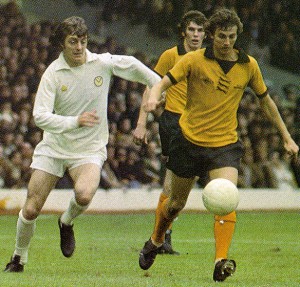 Powell on the ball and under pressure from Allan Clarke in Wolves' game at Leeds in October, 1974.

Barry Powell has returned to the Midlands after bailing out of an extended break in Australia just before England’s cricketers got their hands on the Ashes urn.

The former Molineux midfielder immediately followed up his latest coaching trip back to Hong Kong with several weeks Down Under either side of Christmas.

But plans to take in England’s series-clinching win in Sydney were aborted because of travel weariness.

“I went with the director of Birmingham County Football Development Scheme, Tom Stack, and the idea was to see the Sydney Test,” Powell said.

“We weren’t due to come home until about a week into January and we had tickets for the cricket.

“But we’d had two weeks working in Hong Kong prior to the five in Australia and in the end decided to come home before the Test started.

“We decided we had been away long enough, although we went for a look round the ground, as we did in Perth and Brisbane as well.

“It was a fabulous trip, including a drive of more than 1,500 miles from Brisbane to Sydney on which we stopped in different places for a night or two at a time.”

Powell, who turns 57 this month, was just too young to have gone on Wolves’ trip to Australia in 1972 (see Tours Are Us section) and had not visited the country before. 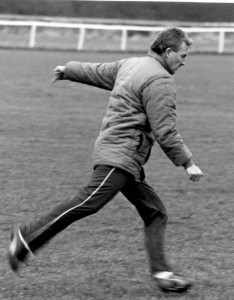 But he is a frequent visitor to Hong Kong, having two spells there as a player in between his Molineux stints and also going back there on coaching duties two winters ago.

And he has recently been prompted to talk about his travels elsewhere after being asked, via Wolves Heroes, to help the author of a book about Portland Timbers.