Evans Sent – But It Didn’t Last

Welsh Legend Missed Out At Molineux 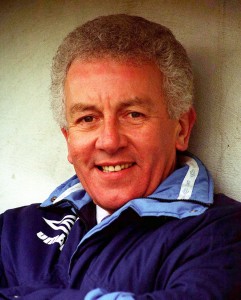 Mickey Evans in the dug-out with Caersws. Picture courtesy of Liverpool Post & Echo.

Mickey Evans was born in the very week Stan Cullis played his last game for Wolverhampton Wanderers and had good reason to revere him.

Alas, the lad who supported Wolves, regularly travelled to watch them from his home in mid-Wales and then signed for them became one of the many talented reserves who ultimately had to seek a first-team career elsewhere – something he did with eye-catching results.

Evans, recruited by Wolves as a 15-year-old, outlasted the legendary manager at Molineux but didn’t play a single first-team game and instead embarked in 1966 on an astonishing Wrexham career of around 500 appearances.

“There was a lot of Wolves support in mid-Wales and I used to travel on the train to games with friends or family from the Newtown area when I wasn’t playing,” Evans said.

“As a fan, I caught the back end of the glory years, although I didn’t go to the FA Cup final in 1960 and had to settle for watching it on TV.

“But you can imagine how I felt when I was signed by the club early in 1963. I was scouted in schools football and found out later that Stan had taken the trouble to come and watch me when I scored two goals for Wales under-15s against Northern Ireland at Wrexham.

“All lads signed pro on their 17th birthday in those days and, when it was my time to nervously knock on the manager’s door at Molineux, Stan asked me if I thought I was good enough. I had to say yes!”

Evans, a goal-scoring inside-forward, progressed to a regular slot in the reserves and has a couple of Central League goals at Old Trafford against a Manchester United side containing the likes of Brennan, Sadler, Fitzpatrick and the two Dunnes as a claim to fame from his Wolves years.

He also has happy memories of taking on some of the up-and-coming Leeds greats at reserve level and his career path might have been different had it not been for events out of his control.

“I lived in digs, first in Penn and then in Waterloo Road, with a lad called Dave Carrick, who was a winger from County Durham,” the 63-year-old added.

“Bill Shorthouse’s mother-in-law looked after us a few doors from the ground. We couldn’t have been closer to Molineux and Eddie Clamp’s mother lived a couple of houses away.

“But Wolves were relegated, Stan was sacked and it was all change. Ronnie Allen brought a few players in from London and I couldn’t see a way into the team.

“The club offered me another year’s contract but it was on the same money and I wanted to play first-team football, so I went to Wrexham in 1966. Dave Carrick went at the same time after the clubs agreed a small fee for us.

“Dave later joined Altrincham at a time when they were spending a bit of money. I tried to talk him out of it but he came back into the League at Preston after a spell with Witton Albion.

“Sadly, he fell ill and died not long after the end of his playing career when he was probably still in his 30s.”

Evans’ own career went from strength to strength. He spent 13 seasons at the Racecourse, appearing in five Welsh Cup finals, including one as captain, and helped the club win two promotions.

As he reverted first into a midfield role, then into defence, Wales’s oldest club reached England’s second grade for the first time and he also played for them in their run to the quarter-final of the 1975-76 European Cup Winners’ Cup before they lost by the odd goal to Anderlecht.

Evans in his youth at Molineux.

Evans represented Wales at schoolboy, youth and under-23 levels before his playing career was ended by a back injury sustained in a match at Fulham in 1978-79.

He joined mid-Wales club Caersws (pronounced Karsoos) in 1983, initially as player-boss, and served as manager for no fewer than 24 seasons – a marathon stint which included taking them to three Welsh League Cup triumphs and a place in the InterToto Cup in 2002.

He has since returned to them and clearly specialises in long service. He has also worked for 28 years as a salesman for an oil company.