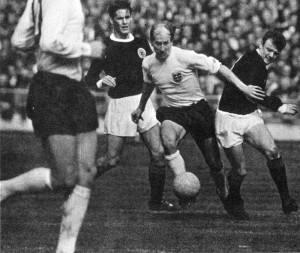 Our piece on Jim McCalliog in the autumn prompted an interesting response from within our readership.

We told the story in mid-October of how we had lost contact with Jim for a year or two after he had called time on his long service in the pub trade.

Wolves fan Kevin Jones read the article with a smile on his face and then regaled us with memories of how he previously made the long trek in search of the former Molineux inside-forward.

In an email to us several weeks ago, Kevin wrote: “I thought I would amuse you with a tale of my wife and I going all the way to the west coast of Scotland to see if Jim would sign my Wolves shirt.

“Imagine my excitement after a five-hour drive when I spotted the King’s Arms in Fenwick, near Kilmarnock. Then imagine my disappointment on noticing the “Under New Management” sign across the door! Apparently, Jim had moved from the pub in the January.

“Despite this setback, my hopes were lifted when a young barmaid told me that not only did she remember him, she actually dated his stepson.

“She said she would do all she could to get the shirt signed. Alas, Jim was abroad that weekend, so I had to make do with the signature on a piece of paper that she kindly gave me.

“I can laugh about it now………and at least we did both have a good couple of days in Scotland.”

Since ending his 12-year stint at Blackburn, he has been scouting for one of his former clubs, Aston Villa, as well as for Nottingham Forest.

Numbers Add Up For Ted

Ted Farmer welcomed the BBC to his home just outside Wolverhampton in recognition of one of football’s more bizarre ‘stats.’

The rampaging centre-forward had a potentially brilliant career cut short by injury – but not before marking his 21st birthday and his 21st senior game for the club by playing against Everton at Molineux on January 21, 1961, and scoring his 21st Wolves goal.

BBC Midlands despatched sports presenter Ian Winter to interview Ted and played it on Friday teatime on the occasion of his 71st birthday.

His feat was also mentioned in the programme for Wolves’ game against Liverpool yesterday.