Lofty Half Right In Memory Game

A Hit And A Miss In Keeper’s Recollections 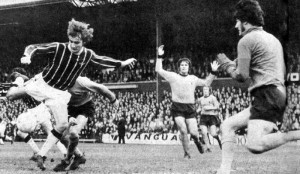 Phil Parkes rushes out under threat from Steve Kember in Wolves' 1-1 draw at Crystal Palace in November, 1970.

Phil Parkes was right on one score and wrong on another when talking over old times with us last week.

We approached Lofty to ask why he had been absent from the 1970 trip to Yugoslavia that we will be featuring in our Tours Are Us section very soon.

And we were surprised to hear him insist he was in the party, although he didn’t appear in the line-up for any of the three matches, nor in the tour squad listed in the Express & Star just before departure.

“I was definitely there,” Phil told us. “I particularly remember us being in Sarajevo and I thought I actually played in one of the games. I’m surprised that the history books show I didn’t.”

Our records, again based on the teams listed in the E&S following phone calls home by manager Bill McGarry, reveal that John Oldfield played in all three matches of an excursion that was shoehorned in between the end of the League season and the four-match Anglo Italian Cup programme.

But we revisited the microfilm files, which are carefully stored in Molineux Hotel, and found – on second inspection – a one-paragraph item belatedly making the point that Parkes had travelled.

Clearly, an error had been made and subsequently corrected in Queen Street while the players were on their travels.

Our recent conversation with Parkes then moved forward a few years to the stunning 7-1 First Division home victory over Chelsea in March, 1975.

“I was sure I played in that one as well because it was Willie Carr’s debut,” the former keeper added. 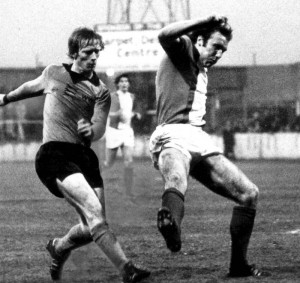 Alas, the various Wolves literature and the Star itself make the point that Gary Pierce was the man in possession of the goalkeeper jersey at that time.

Parkes appeared in the first 14 matches of the season and returned for another substantial spell either side of Christmas but Pierce was the only keeper used over the final third of the campaign.

And the latter’s stint included a rout of Chelsea in which new boy Carr scored one of the goals.