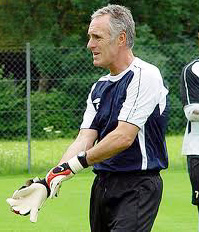 Results were distinctly mixed amid the pursuit of a worthy successor to the club’s last goalkeeping great, Peter Schmeichel, and it’s unlikely Sir Alex Ferguson would take kindly to again making do with men of the standard of Fabien Barthez, Roy Carroll and Massimo Taibi.

Steele is central to the search now as well as carrying out his ‘day job’ of coaching Van Der Sar, Tomasz Kuszczak, Anders Lindegaard and others.

All of which makes his unhappy departure from Molineux in the mid-1990s seem somewhat surprising in hindsight.

It is little remembered – or even recorded in Molineux literature – that Steele served Wolves for a year or two after being recruited by Graham Turner in the late 1980s.

Although registered for action in emergency, he spent most of his time coaching the likes of Mike Stowell and Vince Bartram at the back end of a playing career that most notably took in Peterborough, Brighton, Watford, Derby and his native Newcastle.

Clearly, an entrepreneurial spirit burned inside him, though, because he ran an excellent pub-restaurant in Derbyshire and later put his hands to good use in football worldwide.

Born in the spring of 1954 a few weeks after Wolves had been crowned League champions for the first time, he set up Eric Steele Coaching Services and travelled as far afield as Australia and the United States as well as various parts of Europe.

And it was on his clinic’s site that I was reminded of the differences the 56-year-old, who didn’t play any first-team Wolves games, appeared to have at Molineux with Graham Taylor.

Above references from Ray Clemence and Tony Coton is one from Taylor, who writes of Steele: “I have no hesitation of recommending him as a trustworthy, hard-working person who will not let anyone down on purpose.”

Were the use of those last two words a little tongue-in-cheek? An insight into the ex-England manager’s sense of humour? And a bit of mischief for old time’s sake perhaps.

More bitter words were exchanged between the two when Steele left Wolves a decade and a half ago and Taylor replaced him with Peter Bonetti. 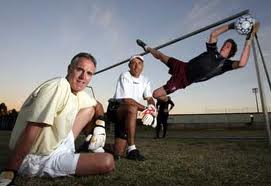 ....and with some of his proteges.

Football, as is its wont, threw the two together at Aston Villa during Taylor’s second spell there, since when Steele has gone onwards and upwards.

He succeeded Tim Flowers as Manchester City’s goalkeeper coach, was briefly appointed by Paul Ince in the same role at Blackburn and now has Sir Alex for company in the Old Trafford dug-out.

Steele will be back at Molineux on match-day duty next weekend and, thanks to the roving touchline cameras, probably on our TV screens even before that.