Success on a plate for Les Wilson.

Rarely a Premier League game goes by without Les Wilson tuning in from afar to monitor developments.

But when Wolves take on Manchester United at Molineux on Saturday, he will pull up an especially comfortable chair in the TV room of his Vancouver home and be absolutely riveted by the contest.

It is the side he proudly played for against his first football love – and he’s just disappointed they can’t both win.

So besotted is he with the two clubs that he attracts raised eyebrows in his delightful corner of the world with the special number plates on his and wife Lois’s cars.

“I bought them a few years ago to show my colours because these are the two clubs that are absolutely in my blood,” he said.

“We have a Lincoln bearing the United plate because I was born and spent my first seven years in Manchester and developed a lifelong love of United through my father and grandfather.

“But Wolves are the club who gave me my chance in the game after spotting me while they were on tour of Canada and the USA in 1963. I am so grateful for the opportunity they allowed me, so we have a Toyota with their plate on.

“Of course I want United to go on and win the League again and I’m lucky that we have so many live matches on over here. 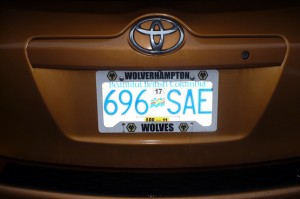 Licensed to thrill.....a suitable plate for a gold-coloured vehicle.

“But I also kick every ball when I’m watching the Wolves. I have never stopped believing they can stay up, even after they lost to Wigan on Boxing Day, and was thrilled when they came back to beat Liverpool and Chelsea.

“Some of their performances against the leading clubs have been outstanding and they have already troubled United twice at Old Trafford this season.

“It should be another great game and is live in Vancouver on Rogers Sportsnet, so I can’t wait to see it.

“I would not miss this one for the world but it’s difficult pulling for both teams.”