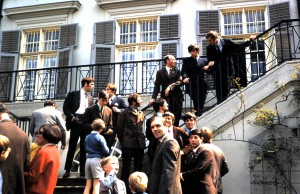 Wolves' party at a reception given in their honour at the British Embassy in Belgrade.

Wolves’ players were busy collecting stamps on their passports at the time they spread their wings in search of a fillip following a quite dreadful finish to their 1969-70 season.

Having signed off the campaign with a 13-match run without a victory from which they still emerged with a final placing of 13th, they braced themselves for a summer of travelling across mainland Europe.

It was the year in which they made their first foray in the Anglo Italian Cup, so two-leg ties against Fiorentina and Lazio would soon follow, as did a pre-season trip to Holland and West Germany.

First, though, five days after the whistle blew on their nightmare run-in with a home defeat against Coventry, came a three-game tour of the country formerly known as Yugoslavia.

It was just over a decade since the club had visited the Balkans for a European Cup tie against Red Star Belgrade and Bill McGarry’s squad had problems both before and after touchdown on their 1970 excursion there.

Dave Wagstaffe’s ankle was in plaster as the result of an injury suffered against Liverpool on Easter Monday and he was one of four forwards unable to be considered when the party flew out on Monday, April 13.

Mike O’Grady also had an ankle problem while Derek Dougan and Bertie Lutton were absent because they had been named in the Northern Ireland party for the Home International Championship.

If Wolves’ players had designs on getting an early close-season tan in Yugoslavia, they were to be disappointed. Snow greeted them in Sarajevo and played havoc with their training schedule. 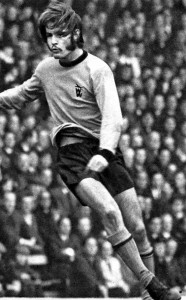 Nevertheless, they immediately recorded their first victory since the 2-0 League success at home to Ipswich on January 24 when a 36th minute goal by Jimmy McCalliog, who was teed up by Derek Parkin and Hugh Curran, made them the first overseas visitors to beat Zeljeznicar Sarajevo in 25 years.

It was a notable scalp as the home side were second to Red Star in the domestic league at the time. But the success came at a cost, with full-back Gerry Taylor having to go off with a twisted ankle. Les Wilson switched to right-back to cover and John McAlle went on as substitute.

McAlle was one of the sizeable young element in the party, who were accompanied by chairman John Ireland and secretary Phil Shaw as well as manager Bill McGarry and his right-hand man Sammy Chung.

But Shaw quickly went his own way by rubbing shoulders with Albion duo Alan Ashman and Alan Everiss and representing the club at the Anglo Italian draw in Rome.

The squad he left behind made a 50-mile trip north-east to Tuzla for their second game, which was made all the more difficult as their opponents, Sloboda, brought in four players from rival clubs to bolster their ranks.

And the challenge proved too much for the Molineux men, who were again beset by problems. Skipper Mike Bailey was barely fit, Curran limped off with a back strain and John Richards hobbled off to be replaced by Derek Clarke, only to then have to return and replace a more stricken Kenny Hibbitt.

Clarke it was who equalised early in the second half but a Bailey own goal again had Wolves on the back foot and they were beaten 3-1.

The players had a look at the capital, Belgrade, before their final match and Richards was a more than interested tourist.

“I was 19 at the time and the trip was my first time on a plane,” he said. “I particularly remember Sarajevo and was fascinated because I knew something about it from my ‘O’ Level history.

“Events there ignited the war because it was where the assassination of Archduke Franz Ferdinand of Austria and his wife took place. I remember doing a tour of the city, a lot of which was in disrepair. My overriding impression was how dour the places and people appeared to be compared with England.”

Wilson recalls visiting a museum at the site of the killings but the squad had a taste of good living as well with a reception at the British Embassy before embarking on the long journey towards the Greek border for the game against Skopje – now known as the capital of Macedonia.

And the city left an imprint on the young Paul Walker, who had made 18 League and cup appearances that season to go with the two he made at the end of 1968-69.

“Skopje was hit by a shocking earthquake a few years earlier and well over a thousand people were killed,” he said. “On the wall of the railway station, we saw a clock, which had been left at the exact time the quake struck.

“There were happier memories, though, from other parts of the trip. I recall going over the mountains in the bus and seeing the snow on the peaks, then we had a fabulous barbecue with an ox roast and all sorts.

“And at a beautiful hotel we stayed at in Belgrade, we were entertained by a pianist. We were all into discos then and he was playing classical music but he was out of this world.”

Alas, Wolves were off-key by comparison when they faced Skopje on Wednesday, April 22, losing 5-2 despite scoring first when Curran converted a rebound after his 30th minute penalty had been saved.

The side again had to frequently reshuffle, this time replacing Bailey and Hibbitt with McAlle and Dave Woodfield and becoming so stretched in the injury absence of Walker and Taylor that even Sammy Chung had to make a substitute appearance for Clarke.

“I think we kept it quiet at the time but it was between Lofty and me who went on,” Chung told us. “We were just runing out of players and Bill nudged me and said: ‘Get on.’

“It was a good few years since I had finished my career as a centre-forward but I slotted in just behind the strikers and did okay as far as I can remember.”

The Yugoslavs led 3-1 at the interval and, although McCalliog pulled one back, the gap soon widened to three at the expense of a side who were virtually on their knees.

Wilson recalled: “As a 16-year-old, I’d had the privilege of playing for the British Columbia men’s All Star team against Red Star Belgrade (then the Yugoslav champions) at the Empire Stadium in Vancouver.

“I was amazed at the technical ability of the Red Star players, their excellent control and running off the ball. They were a very skilful and talented group.

“I remember saying to the Wolves lads before we went how gifted the Yugoslavs were, especially in possession. The Skopje players were highly skilled as well and we found them too hot to handle.

“To say that Bill McGarry was not impressed by our performance is an understatement but we had just completed two long seasons with hardly a break. After an arduous 1968-69 First Division season, we went back to the United States and won the North American Soccer League’s international competition by beating the likes of West Ham, Dundee United, Kilmarnock and Aston Villa. 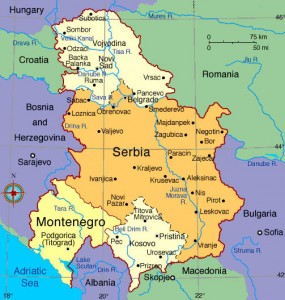 The more modern lay-out of the destination for Wolves' 1970 end-of-season tour. Tuzla is in the north-east of Bosnia and Herzogovinia.

“Then we did a lot more travelling at the end of 1969-70, so we were pleased to have a break afterwards.”

Wolves, who started their journey home by taking the night train to Belgrade, had much better results in the Anglo Italian Cup the following month – and the subsequent 1970-71 season was in many ways lift-off for them. With a thrilling UEFA Cup campaign not far away, maybe the painful experience in Yugoslavia was also a useful one in their development.