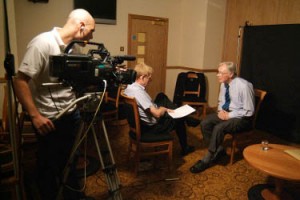 Bill Slater’s penchant for good manners has been revealed in one of football’s best-selling books of this season.

Wolves’ 1960 FA Cup-winning captain is given a mention in John Giles: A Football Man – the autobiography of the Leeds legend who played his second match as a Manchester United teenager at Molineux in the autumn of 1959.

“Managed by the great Stan Cullis, Wolves would go on to win the Cup that season, narrowly missing out on the double,” Giles writes.

“They had Peter Broadbent, a terrific player who never gets the credit he deserves when people talk today about former players.

“They also had the half-back line of Flowers, Slater and Clamp. Slater was a  schoolteacher who played as an amateur for England and for Blackpool in an FA Cup final.

“He was a real gentleman and I can remember him giving me a right telling-off for swearing on the pitch.”

The anecdote prompted a chuckle from Bill, who is now 83, when we relayed it to him today at his home in West London.

“I can’t recall the incident but it wouldn’t surprise me if I did something like that because language on the pitch generally could be better,” he said.

“I might have been a bit different from the others in saying something but I didn’t think there was any point in swearing.

“Fortunately, there wasn’t much of it in our club because Stan didn’t like it and Billy Wright was always against it.” 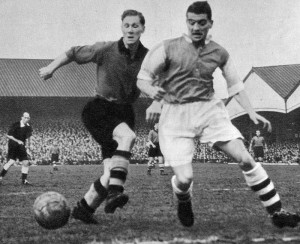 Slater in Molineux action against Arsenal in the mid-1950s.

No-one would argue with Giles’s portrayal of Wolves as a ‘formidable proposition’ and they proved it when, as reigning champions, they beat United 3-2 thanks to two goals by Jimmy Murray and one from Broadbent.

It was the third of four successive victories they registered against Matt Busby’s side.

Alongside Slater at half-back in that fixture in October, 1959, were Eddie Stuart and the debutant John Kirkham.