Success On The Cards For Phil 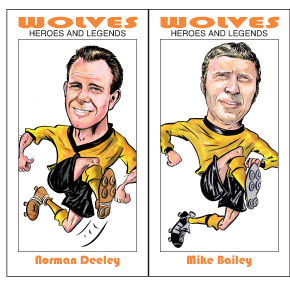 Sets of cigarette cards depicting some of the greatest names in Molineux history in caricature have gone on sale.

Lancashire businessman Phil Neill has added a Wolves section to his growing portfolio and is now considering approaching the club.

And the scope for showing off the collection is underlined by the framed mounting shown below.

“This is more than a hobby to me,” Phil said. “In fact, it’s planned to be a livelihood, although it’s tough at the moment.

“All the caricatures are hand-drawn and I still have the master illustrations if anybody wanted to buy those as well.

“I have used the Wolves Heroes website for a lot of the guidance on drawings and on which players to include. I have featured quite a few clubs and hope the Wolves ones will be popular given the club’s rich history.

“The sets are available for £5.99, including postage and packing, in the UK and are available through my website http://www.philneillcards.co.uk and, in some cases, on ebay. 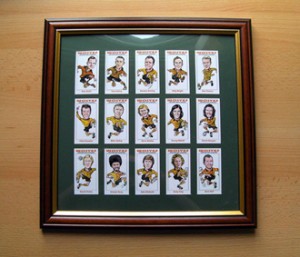 “They can also be bought through the London Cigarette Card Company in Surrey.”

What’s not sure is how soon Phil will be adding his favourite football clubs to his portfolio.

He is a long-time supporter of Blue Square North side Droylsden and watches Chorley on other occasions!