The Safest Pair Of Hands

Kearns A Cool Head In Crisis 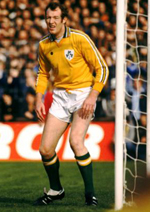 Former Wolves keeper Mick Kearns has modestly played down the ‘life-saver’ tag attached to him recently by his international manager, Johnny Giles.

Kearns was labelled a hero, over 36 years on, for rescuing his Republic of Ireland team-mate Don Givens in the sea off Copacabana Beach during an end-of-season tour of South America.

He has never spoken publicly about the incident but agreed to do so to Wolves Heroes after being told of the following passage in Giles’ autobiography, A Football Man:

“Mick Kearns became the most important member of the squad in a way that no-one could have foreseen,” Giles writes. “We went to the Copacabana Beach the day after the (Brazil) match and Don Givens went in for a swim. Nobody thought anything could possibly be wrong because Don seemed to be about ten yards from us, certainly not far enough out to get into any trouble. But Mick somehow sensed that all wasn’t right. He went in after him and pulled him out, almost certainly saving his life.”

Kearns was then a 23-year-old with Walsall and, on the Irish’s 1974 tour, played in a victory in Chile and a defeat in Uruguay after sitting out the narrow loss against a Brazilian side who were just about to go to West Germany to defend the World Cup.

Although born in Banbury, he won 18 caps for the country where both of his parents were born, two of them coming during his Molineux stay in the late 1970s and early 1980s.

And he has revealed that he was the right man to have on hand during what could have been a much more serious incident.

“In my early years at Oxford, I worked as a trained lifeguard in the close season, so I was always very aware of the dangers around water,” he said.

“We had been told there was a very strong undercurrent just off the shore in Rio de Janeiro and my memory tells me Don wasn’t the best of swimmers.

“Very quickly, he went from being up to his knees in water to being up to his waist and then up to his neck. I could see he was in real trouble, so I went out to him and told the other lads to make sure the lifeguards from the beach followed me in.

“We got him out okay without him needing resuscitation or a visit to hospital. There was nothing like that. But who knows what might have happened?

“Yes, I suppose I was the one who spotted the danger but I’ve never spoken about it before because I didn’t want to alarm any of Don’s family if they weren’t aware of it. Now it’s in the public domain anyway, it’s a little different.”

Kearns’ ten senior games for Wolves came either side of the club’s appearance in the 1980 League Cup final, the 31st anniversary of which is about to be preceded by Sunday’s Wembley showdown between Birmingham and Arsenal. 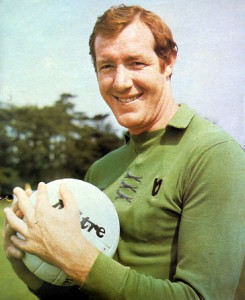 The likeable keeper in Wolves garb.....

And he has fond memories of the occasion against Nottingham Forest, although he was very much second choice to Paul Bradshaw at the time.

“I was on the bench and roomed with Colin Brazier, who was our only substitute on the day and who I played with at Walsall a few years later,” he added.

“John Barnwell and Richie Barker made me feel a big part of things in the Wembley squad and I hope I was able to help Paul a bit because I was more experienced than he was.”