Shock Death Of A Rare Talent 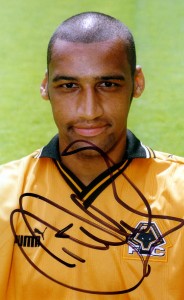 When we decided to include an obituaries section on this website, it was assumed we would be using it to house fulsome tributes to heroes of the 1950s and, eventually, one or two from the 1960s.

In the space of less than three years, though, the greater Molineux family have now lost a trio of highly popular players who played in the late 1980s and 1990s.

It takes something to cast a shadow over a day on which Wolves win 4-0 at home and climb out of the relegation places. But the news yesterday morning of the passing of the tall, elegant defender at the age of only 36 was a gut-wrenching bolt from the blue guaranteed to do just that.

More than a decade had passed since Richards – born in Bradford three months after his namesake had struck a League Cup final winner for the club at Wembley – moved onwards and upwards.

His four-year stay was not always a bed of roses, strangled as Molineux then was by baffling underachievement.

What is inescapable, though, is the favourable impression he left behind, especially on his team-mates.

We have already recorded how Robbie Dennison was too distressed to commentate on Wolves’ biggest ever Premier League win. Equally moving was the haste with which Geoff Thomas signed off his posting on Facebook with the message ‘RIP Big Man.’

Deano was the typical gentle giant. His face could have belonged to a boxer rather than a footballer but his game was all about elegance, composure and timing.

He wasn’t brawny in the traditional centre-half and, boy, did he look the business with the ball at his feet! 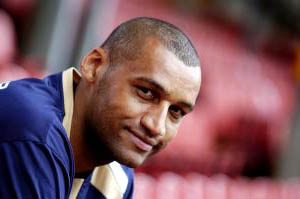 Recruited on loan by Graham Taylor from Bradford City in the spring of 1995, the boyhood Manchester United fan made an accomplished debut in a 1-0 victory at Southend and scored twice in a 3-3 draw at Derby’s Baseball Ground a week and a half later.

He was part of the side unluckily defeated by Bolton in that season’s play-off semi-final and probably peaked as the £1.8m Wolves record signing he became that summer by brilliantly subduing Dwight Yorke and Teddy Sheringham at Aston Villa and Tottenham in the early weeks of Mark McGhee’s reign as manager.

Sadly, the drawn FA Cup tie at White Hart Lane in January, 1996, proved a watershed because Richards was involved in a crash on his way back to Yorkshire that night.

Although his absence was relatively short, his form dipped and he had another two months out of the starting line-up in the middle of 1996-97, this time with hamstring trouble, before returning to score with a thumping header in a win at home to Albion.

He was actually jeered in a defeat against Reading and was brave enough to ‘front up’ in interviews afterwards and admit he was playing poorly.

The reasons became clearer a week or so after his return against Albion when he departed for a cartilage operation that turned into an 11-month spell on the sidelines.

There were strong suggestions that his knee problems were a result of that smash on an icy M62 and, even in 1997-98, his contribution was only 20 games – ending with the FA Cup semi-final defeat by Arsenal at Villa Park.

Thankfully, he was almost an ever-present the following season, although by then Wolves were becoming resigned to losing a major asset – one still short of his 25th birthday – on a Bosman free transfer.

Richards actually played for five Wolves managers. In addition to Taylor, McGhee and Colin Lee, he served Dave Jones and Glenn Hoddle, the latter two away from Molineux. 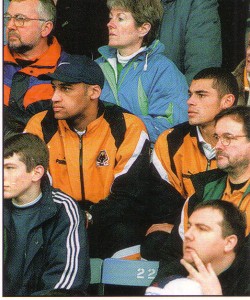 Too often a face in the crowd with Wolves. Deano is flanked here by Jermaine Wright.

With Wolves repeatedly missing out on their holy grail, he took the short cut to the Premier League in response to Southampton’s call in 1999 and it summed up the Molineux stagnation of the time that his last game there was against his first club Bradford, whose 3-2 final-day victory gave them an unlikely promotion and slammed the door on the consolation for Colin Lee’s side of even a play-off place.

There were some wistful looks from the West Midlands as Richards stayed fit enough to total 79 games in just over two years on the south coast.

He impressed Jones’s successor, Hoddle, enough to be taken by him to Tottenham in 2001 for a cool £8.1m (the reverse of the figure Wolves had paid for him) as a replacement for Sol Campbell.

He immediately endeared himself to the White Hart Lane masses by heading a goal against Manchester United, although the five the champions scored at the other end in the second half rather dulled his satisfaction!

Richards exuded the air of a man who needed to be playing on the edge. He possibly found the Championship to be too comfortable and his concentration was not all it might have been, which is why his best Wolves performances often came against top-flight opponents.

It would also help explain why he became a better player in his latter career, albeit one interrupted by further injuries and by the illness that would bring about his retirement in 2005.

I have my personal memories of ‘Deano’ and will forever be grateful for him bringing me a week in the South of France when he was not only selected for England under-21s in the 1995 Toulon tournament but subsequently named as skipper of a squad containing David Beckham and Phil Neville.

Gratitude wasn’t necessarily the over-riding feeling, though, when he suddenly claimed a mastery of the German tongue and led a group of Wolves players out of a cafe on tour in Austria, believing the hostess had said their lunches were on the house. Journalists’ expenses don’t necessarily cover ten lots of lasagne, apfelstrudel and cappuccino, so some debt recovery followed…..

Dean, such a ‘home bird’ that it wasn’t unknown for him to ask his girlfriend to bring his dinner down to Wolverhampton for him from his favourite Bradford chippie, had a nightmare on that 1996 trip with a heel injury, sickness and even raging toothache. Wolves fans probably saw the best of him only occasionally – but they were truly memorable performances when they came round.

Three of the four clubs he served played yesterday and it was fitting that they all (plus Manchester United) won and scored a net-ful of goals.

And there will be a proper chance for Wolves fans to salute him with the visit of Tottenham to Molineux next Sunday.