Matt And JR Face To Face

Keeper Agrees To Open Up 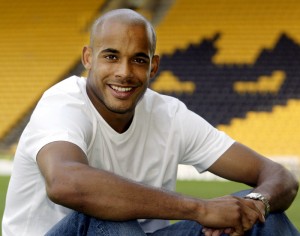 John Richards is delving into Wolves’ recent past for his latest Player Q & A subject.

Having previously featured Bert Williams, Mike Bailey, Andy Thompson and Kenny Hibbitt, this website’s co-owner will be coming into the ‘noughties’ next time round.

He has Matt Murray, all 6ft 5in of him, lined up to field questions both from himself and our readers – and there is plenty to go at.

Apart from the injury heartbreak that forced the highly popular keeper to call time on his career early this season, there is the subject of his forthcoming testimonial.

Murray, who turns 30 just before the end of 2010-11, announced recently that four charities – Penn Hall Special School in Wolverhampton, the Alzheimer’s Society, the Stroke Service Cycling Group from West Park Rehabilitation Hospital and Mzamowethu Pre-Primary School in South Africa – will benefit from the money his programme of events raises.

And he hopes a match at Molineux will round off the activities staged to celebrate the two decades he has spent at the club since the age of nine.

“I was on the board at Wolves and later the MD when Matt was a young lad there and everyone around the place speaks so highly of him,” Richards said.

“It is such a shame that his career has been cut so short because he was showing real promise and seemed cut out for a good crack at playing in the Premier League.

“I’m sure Wolves fans are delighted he has been awarded his testimonial. Hopefully our piece can promote what he is up to and let supporters in on the chance to find out more about him.”

The deadline for receiving questions is a week on Saturday (March 12).

There is another link between Richards and the keeper whose 100 first-team Wolves games were highlighted by his penalty save in the 2003 play-off final against Sheffield United.

Murray is about to take over from the club’s former record goalscorer as patron of the New Cross Hospital Kidney Patients Association.